The number of new homes registered with NHBC in the UK during the first quarter of this year has reached 31,739 – the highest level for this period since 2008.

The figure represents a significant overall 22% increase on last year, when 25,998 new homes were registered in Q1 2012.

The rise has been fuelled by an increase in public sector registrations of 43% in Q1 this year compared to the same period last year. The main driver for this rise has been the Government’s Â£2.2 billion Affordable Homes Programme which aims to deliver 170,000 new homes by April 2015.

The NHBC statistics also reveal an enormous 61% increase in new houses being registered in London in the first quarter of 2013 compared to Q1 last year. The landmark Battersea Power Station redevelopment helped boost the figures as more than 800 new properties were registered during the first phase of the project. Over the next 15 years, more than 3,000 new homes will ultimately be built on this iconic London site.

As the leading warranty and insurance provider for new homes in the UK, NHBC’s housing registration statistics are a key leading indicator of activity in the new homes industry.

Commenting on the Q1 figures, NHBC Commercial Director Richard Tamayo said: “New home registrations in the UK have reached a five year high for Quarter 1 rising 22% on the comparative period, boosted by a very strong performance in the Greater London area.

“This rise in new homes being registered – particularly affordable homes – is very encouraging news for Britain’s house-building industry which has been through a very difficult time in recent years. These figures may be an indication that much-needed confidence is returning to the industry, although they should be viewed in the context of overall new homes volumes remaining significantly below historic levels.” 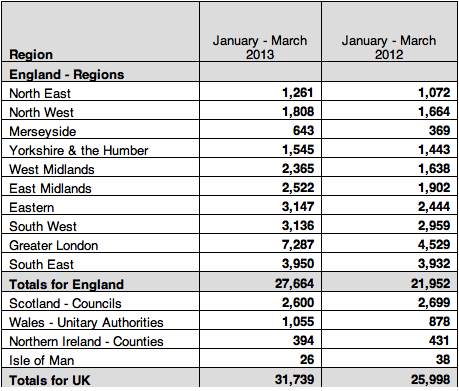 Financial education in the workplace