The Pound began the week trending in a slightly softer position as comments from the Bank of England's (BoE) chief economist (regarding interest rates being as likely to fall as rise) weighed on demand for the British asset. However, the central bank's chief economist later asserted that with the UK economy performing well, the only way for borrowing costs to go is up, and the Pound advanced accordingly. After hitting a one-month high against the Euro, Sterling began to retrace its steps as UK public finance data detailed a higher level of borrowing than anticipated. As the week progresses influential UK reports are in short supply and the Pound's performance may be subdued as a result.

After Alexis Tsipras won the Greek general election by a fairly impressive margin, the Euro recorded modest gains against several of its rivals. However, the common currency's uptrend wasn't built to last and with various industry experts betting that the European Central Bank (ECB) intends to expand quantitative easing in the near future, the Euro soon came under pressure. Poor German Producer Price data also weighed on the common currency, as did the expectation that the Eurozone's Consumer Confidence index would show a decline in sentiment. In the week ahead the Eurozone's Markit Manufacturing/Services/Composite PMIs may inspire some Euro volatility. Any data which supports the expansion of QE would be Euro-negative.

The US Dollar posted widespread declines last Thursday as the Federal Open Market Committee (FOMC) delivered its interest rate decision. The Fed left borrowing costs on hold and intimated that interest rates could remain static until either the end of this year or the beginning of next. However, this week Fed official Dennis Lockhart commented that there's still cause for interest rates to rise in 2015 and the 'Greenback' reversed previous declines as the week progressed.  US Durable Goods Orders and Markit Manufacturing/Services PMI reports may serve to inspire US Dollar volatility over the next couple of days. 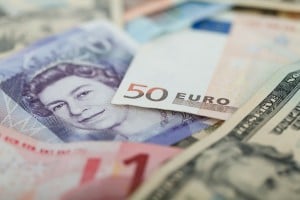 The Australian Dollar was pressured lower against its most traded rivals on Monday as the Australian economy was described as 'toast', largely as a result of the headwinds attacking the nation from China. The prospect of US interest rates rising in 2015 also limited demand for the 'Aussie' in a quiet week for Australian data. Given the close ties between Australia and China, tomorrow's Caixin China Manufacturing PMI is likely to affect demand for the Australian Dollar. An increase in manufacturing output would be AUD-positive, but a decline may drive the currency back to previous lows against peers like the US Dollar and Pound.

The New Zealand Dollar tracked its Australian relation lower on Monday as the prospect of the faltering Chinese economy having a detrimental impact on New Zealand's own economic outlook limited 'Kiwi' demand. A less-than-impressive domestic consumer confidence report also took a toll on New Zealand Dollar trading. In the days ahead the only New Zealand-specific data release to focus on is the nation's trade balance numbers for August. A widening in the deficit would be NZD-negative.

Falling oil prices, Chinese growth concerns and the prospect of the US adopting higher borrowing costs all weighed on Canadian Dollar demand last week, with the nation's as-forecast inflation report failing to have much of an impact. This week the 'Loonie' gained as Bank of Canada Governor Stephen Poloz expressed confidence in the ability of the Canadian economy to weather the current commodities downturn. Poloz deemed the Canadian economy 'highly diversified' and CAD rallied against the Pound and US Dollar as a result. The only pertinent Canadian ecostat due out over the rest of the week is the nation's retail sales report, set for publication on Wednesday.