One of the world’s top minds on radar research will outline how his work is helping to improve our air traffic control and border monitoring systems.

Professor Hugh Griffiths, the winner of the Institution of Engineering and Technology’s (IET) A F Harvey Prize, will outline his research at a special lecture on Thursday 23 May in central London.

Hugh says that whilst radar could be described as a mature subject with relatively little new to be achieved, in fact the reality is the opposite.Â  “Modern technology, especially digital processing power, is opening up new possibilities, and there are plenty of new applications that are likely to benefit”, he said.

“One aspect of this is bistatic radar, where the transmitter and receiver are in different locations. This introduces some complications, but also some benefits.Â  It can form the basis of lower cost systems; allows radars that exploit broadcast or communications transmissions as radar signals. This technique is known as Passive Bistatic Radar.”

Techniques being explored by Professor Griffiths, of University College London, could result in radar systems that are extremely difficult to jam because the enemy does not know where half of the radar actually is. Contemporary radars bounce electromagnetic pulses off targets and pick up the reflections with antennas at the same site. But there is no need to put the transmitter and receiver in the same place.

Professor Griffiths says that some radar techniques that have been around almost from the beginning can provide the impetus for a new generation of radar systems by doing things conventional radar systems cannot.

One further advantage is that, by removing the power-hungry transmitter from the receiver, it is possible to make the sensor-end of the radar more mobile. “We are very interested in using UAVs now and bistatic operation is very compatible with all that,” he said.

Griffiths says that by using more diverse signals, it is possible to home in on targets designed to evade traditional methods and avoid jamming signals. One issue that today’s radar systems have is that they are constrained in the frequencies they can use. One option might be to build radar systems that sniff the airwaves to dynamically adjust to use pieces of unused spectrum. Even regular TV and radio signals could be adjusted to make them compatible with radar.

“Everyone wants more bandwidth, but it’s increasingly difficult to fit everyone in. So there is a lot of interest in techniques that might use broadcast signals as radar sources. You could even think of designing your broadcast waveforms so that they do not just do their normal job, but are also made more useful for radar,” says Griffiths.

Griffiths continued: “The key is identifying the right applications. Air-traffic control looks to be an interesting one. You could use broadcast signals for that. In densely populated areas, suitable radar exists; but in some areas there is nothing. Broadcast signals are strong and their transmitters are favourably located to give high coverage. In Africa, for example, being able to use broadcast sources for radar would give you something you don’t have yet.” 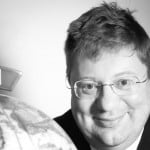 The technique scales down too; burglar-alarm systems of the future may piggyback off wireless network signals to determine if an intruder is moving around inside or outside the premises. Splitting the radar in two is set to put it on its next wave of development.

Professor Andy Hopper, President of the IET, said: “Our judging panel were presented with some very high calibre candidates, but Professor Griffiths’ work shone through. I really hope this prize will help him to continue his ground breaking work with radars.”

Sir John O'Reilly, Chairman of the IET A F Harvey Search and Selection Committee, said: “The IET A F Harvey Engineering Research Prize is a major annual award, honouring an exceptional individual researcher for a specific outstanding achievement in a defined area of engineering research with promising prospects for yet further significant advances.Â  The prize money of Â£300,000 is used to support further research by the recipient, contributing additionally to the benefit of society.”

Professor Griffiths’ A F Harvey Prize Lecture: From a different perspective: “Principles, practice and potential of bistatic radar”, takes place on Thursday 23 May at the Institution of Engineering and Technology in central London.