David Blanchflower, a former economic adviser to the Bank of England, has said that the school leaving age should be raised to 18 to address the problem of youth unemployment.

The Guardian says that Blanchflower will also tell a 3 day international conference on young people in Belfast today that the coalition government should have more local policies such as allowing employers in the country’s more depressed regions to hire young people without having to pay National Insurance.

Youth unemployment, Blanchflower will say, is “the single biggest issue facing this government”. He is also very concerned says the Guardian that it could help to destabilise the peace and power sharing process in Northern Ireland.

Mr Blanchflower says that raising the school leaving age is a ‘no-brainer’ and that this does not mean more people with A-Levels as they could be taught practical skills instead.

The Dartmouth College based economist’s view is that those young people are better off in school than on the streets and that no amount of government fiddling of the figures would help the situation.

But for many this is a non-story, the school leaving age is already planned to be raised in England to 17 in as soon as 2013 and up to 18 by the year 2015. The Welsh Assembly has also said that it will, without compulsion, support education to age 18. So presumably David Blanchflower’s call is for it to be compulsorily extended nationally.

But let’s make sure than any move upwards in the school leaving age is made on a permanent basis and for the overall economic needs of the country, not just use schools as a temporary repository for youngsters we have no other place for. 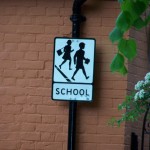 The only benefit would be to keep young people occupied in an environment that many had already been longing to rid themselves of. It could turn out to be a very expensive and unenforceable policy.

And what would you do if you suddenly needed a huge injection of people into the work-force? Lower the school leaving age again? That would make educational modelling and costing even more unpredictable than it already is.

And then there’s the matter of the retirement age. How is it that we haven’t got enough jobs for the young but we have to keep raising the retirement age? If we can pay for extended education but not for pensions then have we got some misallocation of money in the system somewhere?