Republican US Senator, Rand Paul has been confronted by Luke Rudkowski from We Are Change over his endorsement of Mitt Romney.

Rand Paul, who is the son of Ron Paul, faced questions from the pressure group member relating to hisÂ endorsementÂ of Romney who, according to the Guardian, may have attended this year's Bilderberg meeting.

Paul's encounter was caught on camera and the YouTube video is growing in popularity as many of Ron Paul's supporters feel that his son's endorsement of Romney is a direct betrayal of his father even raising question marks towards Ron Paul's real political intentions and loyalties although many political pundits believe the latter assumption is unfounded.

In said YouTube video, the Senator forÂ Kentucky initiallyÂ acknowledgedÂ Rudkoski however was reluctant to answer any questions relating to the Bilderberg.

Rudowski continued to follow Rand Paul who sustained a stony silence towards the interviewer even when asked why someone who was aware of the sinister nature of the Bilderberg group would choose to condone someone whoÂ attended a Bilderberg meeting.

Later in the video RudkowskiÂ enrolled help from Abby Martin to interview Rand Paul who remained silent after being approached and asked why he is supporting a man who has endorsed all the policies that Paul has voted against.

Both Abby Martin and Luke Rudkoski expressed a sense ofÂ disappointmentÂ and betrayal from Rand Paul's actions and the implications for Ron Paul's supporters and the liberty movement. 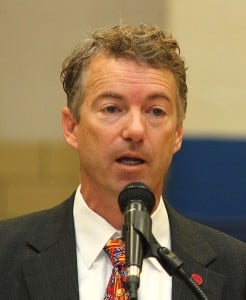