Landlords in Prime London Central (PLC) have reason to be positive as overall rents have crept up in the prime micro-markets, breaching an average of Â£1.00 per square foot a week. This headline result comes despite a 50% slow down in rental inflation over the past 12 months.

A firm dynamic of ‘location over size’ has emerged in PLC as corporate belt-tightening in the financial sector impacts on tenant choices. The most globally renowned areas have continued to forge ahead remaining top of the tenants’ wish-list.

New research from London Central Portfolio (LCP) shows that, on average, Knightsbridge is now achieving the highest weekly rents per square foot at Â£1.27 after a notable increase of 9.5% last year. Mayfair witnessed growth of 4% whilst Belgravia and Kensington held steady during 2012. These sought-after postcodes are all fetching rents above the Â£1.00 per square foot mark per week.

The increasingly fashionable Marylebone has also remained popular amongst London’s tenants. This saw the largest rental increase of 10% over the same period, as its buzzy atmosphere and convenient links to Canary Wharf and Heathrow dominated tenant priorities. Marylebone is now catching up with the internationally favoured areas, achieving average weekly rents of 96p per square foot.

Small upturns were also witnessed for Paddington and Bayswater, South Kensington and Chelsea. These core areas saw rental increases of between 2% and 4%.

The areas more favoured by the British rather than international tenant, such as Pimlico and Notting Hill, have been hardest hit by the economic downturn, both witnessing rental declines. Covent Garden, a popular enclave for ‘City Slickers’ was the worst affected area last year – down 15% to 73p per square foot a week. (Click on graphs to enlarge.) 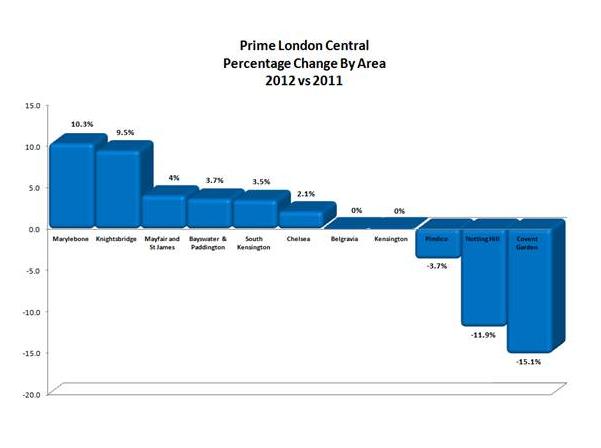 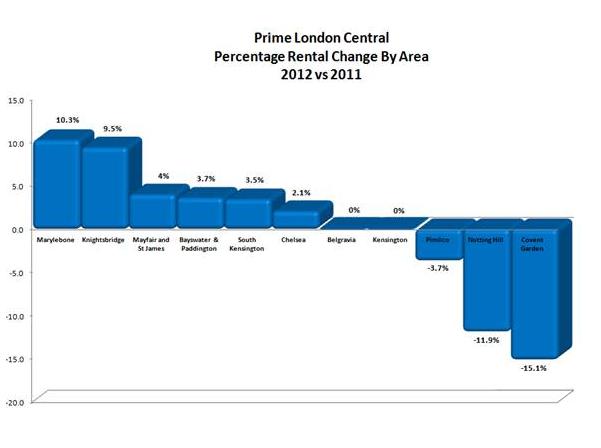 Landlords nevertheless need to be wary of a squeeze on net yields for the foreseeable future.

Capital values continue to increase strongly as buyer demand outstrips supply. This is both due to PLC continuing to attract global wealth, whilst existing owners are not motivated to sell and divest of their best performing assets. Â Good news for investors as property prices appreciate but the flip-side has been an overall increase in rental stock.

Tenants now have greater choice and are able to negotiate harder. As a result, rental increases are suppressed and re-let inflation has slowed by 50% after sharp increases in 2011, to just 3.4%.Â Void periods have also doubled from 12 months ago as Landlords hold out for the highest possible rents and best overall covenants.

One and two bedroomed units remain the hardest working and most resilient sector of the market with rents increasing slightly for these properties last year. On average, one bedroomed units now achieve the highest average weekly rent per square foot, Â£1.08 this quarter. This compares with 81p for larger 3 bedroomed units, which have seen no growth this year. 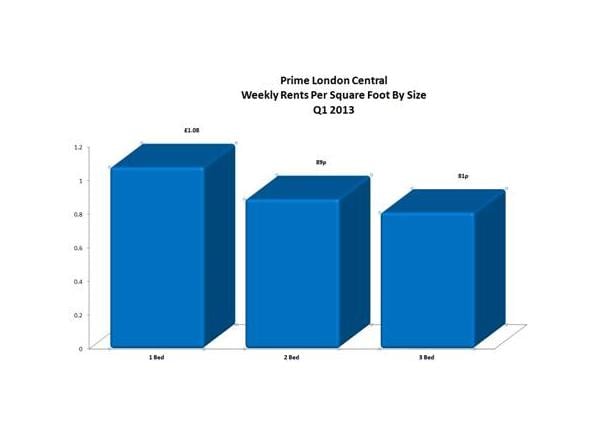 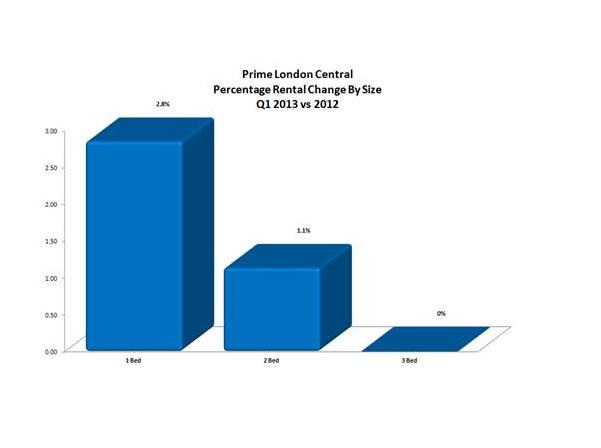 With lower rental allowances offered by the major blue chip corporates and tenants feeling harder up, focus has clearly shifted to smaller units as tenants sacrifice space rather than location. This is symptomatic of the current economic climate but reflects the importance of the age old adage ‘location, location, location’.