Economists are not like normal people. We need to be a bit odd in order to see the world a bit differently, and this is ensured both through the usual self-selection mechanisms (odd people choose to become economists) and rigorous training (odd academics teach odd students). The serious point here is that the discipline does involve a lot of analysis and judgement, as far as possible on an objective basis and normally using numbers or other data. Of course, economists still like to pretend that we are real people (even if we’re not). And we still fall prey to the same kind of biased inference as everyone else.

So, to start with, I should apologise. This column is likely to be one of the least economist-y I’ve written, because it does not stem from objectively analysing data. Instead, it is based on the limited sample of repeated annoying experiences among my friends and colleagues. Despite this, it is all the same leading me to challenge my belief in the power of economic markets.

Like millions of others, most days I commute into London on the train. When the company currently running my franchise was appointed, I was pretty happy. Having endured seriously poor performance under the previous lot, the new bunch seemed to make a good start, with delays falling noticeably and a new lick of paint sprucing up the trains and stations.

That now seems like a long time ago. Since the summer, my rail service has been appalling. There have been delays for no discernable reason. Trains have broken down once I’ve already been on them. And half-hour delays are now more common than getting in on time. Worse, it seems that I am not alone in this experience; friends using London Bridge station, in particular, say that it has frequently descended into chaos ever since they cleverly decided to shut down three platforms but still try to run most trains.

Clearly, these observations do not make for the normal high-quality analysis that I aim to deliver (well, sometimes). So, still being an economist underneath all the rage, I tried to conduct a little bit of analysis. 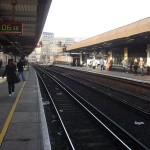 First, I looked at some investment data. While they don’t typically fix the line, private companies are in charge of buying and maintaining the rolling stock that we all use. In fact, the trains are owned by rolling stock leasing companies (ROSCOs), which then lease them on to the operating companies. Ideally, I wanted to get a sense of whether private investment in these trains had picked up over time – one of the promised fruits of privatisation. My suspicion, based on my experience, was that it hadn’t.

Sadly the ONS doesn’t publish ROSCO investment data, but I did dig out some data on private sector investment in transport and storage. This is clearly not just ROSCOs – lots of other things are in there too – but the trend is not encouraging. After accounting for 1.2% of GDP at the start of 1997, in the latest data this private investment accounted for under 0.7% of national income. That gap doesn’t sound like much because the absolute amount of investment is very small, relative to the big GDP number. But a relative halving of investment is not a good thing in terms of maintaining a capital stock, let alone improving it. If ROSCOs have followed this trend, it is no wonder trains keep breaking down.

Second, I decided to record my travelling experience over 50 days to get a sense of the implied probability of train problems. If I experienced 5 delays over 50 days, that would tell me something about the average likelihood of problems. I started with grand plans to differentiate between types of delay, but this got depressingly like hard work. So, instead, I opted for a simple binary approach – 1 for a day where I got to and from work with no overground delays (I’m ignoring the tube here), and 0 otherwise.

Unfortunately, this didn’t work very well either. Because, in my 50 days experiment, I literally had a delay every single day. There was no day where I managed to travel into work and back home on time (to be precise, within 1 minute of the schedule).

Just to emphasise the bonkers nature of this, I crunched some more numbers. Assuming each day’s travel is independent – which isn’t as daft as it first sounds – then in order for me to have about a 50/50 chance of experiencing a delay each and every day over 50 days, the probability of a problem on any individual day needs to be more than 98.5%.

I don’t know about you, but I don’t think that’s a great delivery of service. If this keeps going on much longer, I may seriously start to doubt the market’s ability to deliver what customers want. And not because of obvious externalities or silly mistakes, which happen all the time. But because the infrastructure of private regulated markets may simply be a million miles away from what we need to allocate resources effectively.

Liberty, anonymity, the state and you

What does an engineering skills shortage mean for the UK