Rents in September nudged up 3pc year-on-year across the UK, making it the third consecutive month of slowing annual growth

Rents across the UK rose just three per cent in the 12 months to September, the slowest annual growth rate recorded this year, the HomeLet Rental Index has revealed.

Tenants signing up to a new agreement during September agreed, on average, to pay £910 per month in rent. Whilst this is up by 3 per cent on last year, it represents a monthly reduction of 0.8 per cent when compared to August. Rental price inflation has slipped from a high-point of 4.5 per cent in March 2016 and the rate of increase has now fallen in each of the past three months.

This slowing rate of increase reflects modest decreases in average rents in many areas of the country, which may suggest we are reaching overall affordability thresholds.

“Landlords are being very careful to ensure rents remain affordable for tenants. Despite factors such as higher Stamp Duty on purchases for buy-to-let investors, and the tax changes coming in from April 2017, it would appear so far landlords have absorbed any actual or expected decreases in their yields, rather than pass this on through higher rents.”

Inflation in the private rental sector is now running behind house price inflation and relative affordability of rented over ownership has improved.

“Whether those impacted can afford to continue to keep rents stable may depend on other variables, such as mortgage interest rate movements. These tend to be determined by factors such as general inflation outlook and central authority interest rate responses. It seems a complex cocktail of external factors could now begin to play a role in determining the future direction of rents in a ‘pre-Brexit’ economy.”

However, although the rate of growth is slowing the September 2016 HomeLet Rental Index shows rents continuing to rise in almost every area of the country on an annual basis, with 10 out of the 12 regions surveyed recording an increase to September.

Of the other two regions, Scotland recorded a 1.7 per cent decrease on September 2015, with the average tenant signing up to a new tenancy agreeing to pay £610 a month rent. Meanwhile, rents in the North-East were unchanged.

“Landlords and tenants alike will need to monitor the market carefully as we get closer to the April 2017 reduction in tax relief on buy-to-let mortgage interest. The recent trends in rental values appear to be changing, which may yet prove beneficial for both tenants and landlords if it reflects some rebalancing between yields and affordability. Both are important for the proper functioning of the increasingly important private rented sector.” Concluded Totty. 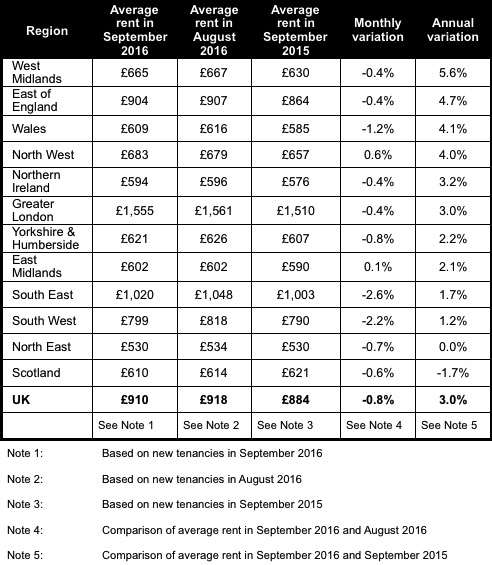