The Royal Bank of Scotland is due to be fined between Â£400 and Â£500 million by the Financial Services Authority and US regulatorsÂ for manipulating Libor, the key benchmark interest rate for the global financial system.RBS, like Barclays and UBS, has admitted to lying about the rate at which banks lend money to each other in order to bolster trading profits and protect itself from losses. Â Across the globe a further 20 banks are under investigation for similar activities.

“This is nothing short of kamikaze greed. Libor is the railroad tracks on which our banking system runs, RBS and other banks have shattered trust in the very foundations of our financial system.

"The manipulation of Libor is not a victimless crime. The rampant greed and dishonesty of RBS has forced small businesses to the wall and short changed ordinary families."

RBS has fired 4 traders and suspended the Head of Rates Jezri Mohideen,Â after an internal investigation. However, pressure is increasing on the Head of the Investment Bank, John Hourican and Head of Markets, Peter Nielson to step down.

"Bankers must face the consequences of their actions just like the rest of us, and that includes those at the very top. Â But this isn't about a few bad apples, this is deep rot in the very fabric of the banking system. Â Bankers were incentivisedÂ  to lie and cheat because of an obscene bonusÂ and pay culture which rewarded short term profits at the expense of all other considerations."

There have been concerns about a public backlash over RBS, which is over 80% publicly owned, sending taxpayers money across the Atlantic to pay the fine. In a speech on Monday, the Chancellor George Osborne intervened, calling on RBS to claw back bonuses in order to pay a portion of the US fine.

"We cannot afford to reward bankers for failure. RBS' reputation and business is in tatters and yet it has still set aside a bonus pool of over Â£250 million to give its senior staff a golden pat on the back. Â People have simply had enough and are starting to move their money. Banks are finally learning the hard way that the customer is always king."

John Fingleton, an RBS customer from Aviemore,Â  is closing his current and savings accounts following the announcement: 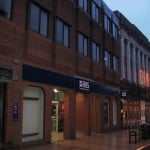 "I’ve paid for this fine twice, both as taxpayer and as a customer.Â  Having been with RBS for nearly 20 years I’m leaving because they simply do not have the integrity I expect of a bank".

The news comes at the end of a disastrous year for the reputation British banks, which have been mired in scandals from mis-selling to money laundering and rate fixing. Â A recent report by OFT into the current account market found that the rate at which consumers switch providers has increased since the bank bailouts.

Andrew Haldane, a senior director at the Bank of England,in a speech earlier this year, admitted that banks had become ‘too big to prosecute’ and the fines levied on them we’re seen as part of the costs of doing business.Â  He appealed to ordinary customers to move their money if they wanted to change the behaviour of high street banks.

Motor Traders Drive out of Recession