The Chancellor's long-expected sell off of the public shareholding of RBS shares was expected to start this week, with institutional investors likely to be offered up to £2.5 billion worth of shares as early as today [1].

Responding to the news, Fionn Travers-Smith, Spokesman for Move Your Money, said:

"Flogging off the RBS shares at a massive loss to casino City traders is not just a travesty, its a dereliction of duty from the Chancellor, George Osborne.

"There is no evidence that returning RBS to the private sector will have any material benefit for the UK taxpayer whatsoever, and the public has been completely excluded from the debate about what should be done with our stake in RBS.

"Osborne talks about RBS serving the working people of Britain, but the only way that will happen is when we convert the bank into one that serves the public interest, not flog it off on the cheap to the people who caused the crisis. We are being robbed of our dues from a bank we already own."

The news comes at a time when opposition to the sale of the public shares in RBS is growing rapidly. 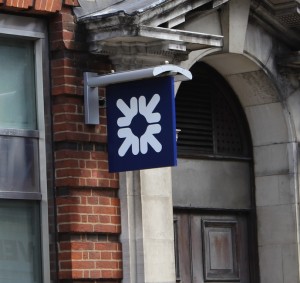 Over 85,000 people have signed an online petition demanding an end to the RBS firesale, [2] whilst commentators from across the political spectrum have questioned both the timing and the justification for a sale in the first place [3].

In announcing the share sale back in June, Osborne attempted to counter this opposition by publishing a letter from Mark Carney, the Governor of the Bank of England, in support of the sale.

Carney's intervention has since been criticised for not conducting a wider consultation within the Bank of England, and for containing no supporting evidence to substantiate claims made on the effect on the economy [4].

"They say insanity is doing the same thing twice and expecting different results, yet this is exactly what we are seeing in the UK banking sector."  continued Fionn Travers-Smith

"George Osborne must stop the firesale immediately, and instead convert RBS into a bank that serves the public interest."

“RBS had to be bailed out urgently, but it doesn’t have to be sold off at the same speed.

“Labour has always supported the eventual return of RBS to the private sector but taxpayers who bailed out the bank will want their money back and will be suspicious of any fire sale. The Chancellor needs to justify his haste in selling off a chunk of RBS while the bank is still awaiting a US settlement for the mis-selling of sub-prime mortgages.

“Two years ago George Osborne said he would only countenance a sale of RBS when ‘the bank is fully able to support our economy and when we get good value’. Neither of these tests has yet been passed.”

[3] The Evening Standard – Why George Osborne Should Hold Fire on His RBS Shares Sell-Off http://www.standard.co.uk/business/markets/jim-armitage-why-george-osborne-should-hold-his-fire-on-rbs-shares-selloff-10310560.html

The Guardian – RBS: Why the rush to sell it off? http://www.theguardian.com/business/2015/aug/02/rbs-why-the-rush-to-sell-it-off?CMP=twt_gu

Will Cameron really listen to the calls for an EU referendum?

Can I rely on past investment performance

US Shale Is Immune To An Oil Price Crash In 2017

Government needs to put stability ahead of headlines