For the first time ever the Bank of England has reported its interest rate decision, the minutes and the inflation report all on the same day, now called ’Super Thursday’.

Here we see what some of the commentators think.

“Amongst today’s deluge of data, perhaps the most significant piece of information – while just from one member – is the widely anticipated MPC split over rate hikes. For the first time in 2015, the Committee is divided. While the dissenter remains in the minority, today’s results are yet another nod that the first hike could be just around the corner, after six years of record low rates.

“The waters have been muddied of late – on the one hand oil prices are falling again, but countering that is stronger than expected wage growth. These conflicting inflation trends are adding an extra layer of complexity to the rates outlook, but today’s vote count indicates an incrementally more hawkish stance by the Committee as we approach the end of the year.” 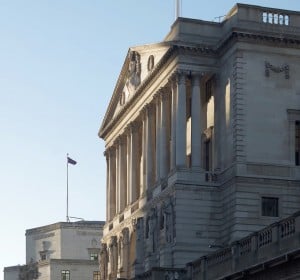 “Despite the committee’s relatively unified decision to keep rates on hold, domestic demand has been stronger than the Bank expected in May.

“The Governor’s remarks about inflation shooting through the target in two years’ time imply that rates could rise ahead of current market expectations.

“Meanwhile, the Bank is fairly relaxed about the recent fall in employment and views underlying productivity as a bit stronger than previously thought.”

“With strong consumer spending and earnings growth currently boosting GDP and wallets alike, it’s little surprise to see the MPC’s Ian McCafferty vote to pull the trigger on an immediate rate rise. Gains to Sterling suggest the markets have already priced in an impending interest rate rise following Mark Carney’s recent indication they would ‘come into sharp relief’ at the ‘turn of the year’. However the recent rise in unemployment and fragile forecasts for productivity, makes a credible case for the bank to keep rates lower for longer. Despite the wave of expectation for a telling move on ‘Super Thursday’, we still believe there’s plenty of time yet till the hawks get their way.”

“The real surprise in today’s MPC minutes is that there was only one dissenter. In fact, the MPC now appears to be split in three distinct camps with one member voting for a rate hike; ‘some’ other members not far off joining in; and then the majority content to sit tight.

“There is no suggestion that the majority of members will vote for rate hikes any time soon. They appeared to play down the pickup in wage growth, pointing to the influence of bonuses, and there is clearly a concern that the appreciation of the pound is causing a tightening of monetary conditions on its own.

“The Inflation Report confirmed the impression of a Committee that is still some way off from the first rate hike. The inflation profile is lower than May’s throughout the forecast horizon and the Committee has not seen any further reduction in slack, despite economic growth remaining firm.

“Overall today’s publications confirm our view that the chances of a 2015 rate hike are very low. While the markets had brought forward the date when they expected the first rise to Q1 2016, we remain of the opinion that the first rise could come later on in the year.”

“The Bank is right to keep rates on hold and recognise the ongoing risks to our weak economic recovery.

“Given the Chancellor's plans for severe spending cuts, putting interest rates up too soon would hit growth hard, choking off recent gains in employment and earnings for working-age people.”

“The MPC took the right decision in maintaining interest rates at 0.5 per cent. Our latest research shows that nearly half (46%) of freelancers expect their business costs to increase in the next 12 months. Raising rates too soon would add to this pressure.  “Although the GDP and wage growth are in more positive territory, inflation remains around zero per cent – a far cry from the Bank’s two per cent target. The UK’s productivity also remains short of where it should be and has yet to return to the levels seen eight years ago."

And if you fancy a flutter on when rates might go up, what are the bookies saying?

William Hill has lengthened its odds about the Bank of England raising the Interest Rate before the end of the year from 6/5 (bet £5 for profit of £6) to 5/4 (bet £4 for profit of £5).

'Some financial experts were expecting a more significant indication that the Rate might soon be on the rise, but the margin in favour of the status quo suggests something significant will need to happen before the much anticipated rise takes place' said Hill's spokesman Graham Sharpe.

BoE Interest Rate To Rise By End Of Year:

House Prices Rise Across the UK