Reactions14: The Sleeping Green Between by Jennifer Vickers

Inspired by the little known story of a First World War soldier, an intricately designed textile artwork containing almost 200 hand-stitched crosses is to go on display at IWM North, part of Imperial War Museums, to mark the Centenary of the conflict.

The Sleeping Green Between, by artist Jennifer Vickers, is the second in a series of works specially commissioned by IWM North in the year of the centenary.

The new installation goes on display at IWM North on Saturday 14 June, as IWM North welcomes visitors to a mass participation day of First World War inspired craft and embroidery.

Vickers' work explores the relationship between people and their past. The piece is the latest in IWM North's Reactions14 series of new artistic responses to the First World War.

The Sleeping Green Between is a phrase used in First World War poetry to describe no man's land – the deadly area of land that lay between opposing trenches.

The large quilt installation is inspired by the Red Cross quilts which were made to raise funds to support the war effort at the time, as well as the artist's own First World War family history. 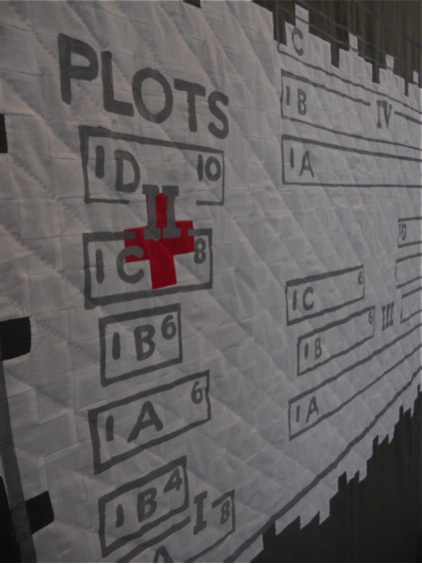 The hand sewn piece has taken over four months to construct and includes 179 crosses to represent the war graves in a First World War in Belgium.

A single red cross on the quilt represents Vickers' great-grandfather John Weston, from Manchester, who was killed in action in 1915 and buried at the cemetery.

Jennifer Vickers said: 'My great grandfather's actions have continuing significance today, yet he remains a remote and romantic figure.

'After his death, John's wife contracted a condition known as 'Sleepy Sickness' and their son Samuel spent much of his childhood at an orphanage. Samuel then strove for a peaceful life with greater security and opportunity for his children – something which has benefited me to this day.

'My great-grandmother made quilts to supplement the family income and my grandmother worked in a cotton mill from the age of 12 so embroidery has been a huge part of my family history.'

Vickers' works feature in the collections of the V&A in London and Whitworth Art Gallery in Manchester.

Visitors inspired by Vickers' piece can get stitching on Saturday 14 June with a full day of free activities inspired by craft during the First World War. Join in mass participation embroidery with Manchester Craft and Design Centre; take a tour with a textile conservator and discover the craft behind intricate pin cushions made by convalescing soldiers.

For a £25 booking fee  (all materials are included in cost) visitors can also join a workshop with artist Jennifer Vickers to create an individual embroidered pin cushion, inspired by those made in the First World War by convalescing soldiers. Booking through www.quaytickets.com.

The installation is free and runs until 21 September. For more information on Jennifer Vickers' installation, for the First World War Craft Day, or for the booked workshop, visit www.iwm.org.uk or follow @I_W_M #IWMNorth