The global financial crisis has had a negative impact on many sectors of the marketplace, including domestic and commercial environments. Although the automotive industry suffered early on when it came to domestic vehicle production, other sectors tell a surprisingly different story.

The commercial vehicle market, in particular pick-up trucks, has seen a noticeable boom in production and sales across the world

An example of a recent success story is the launch of 'The Steed' pick-up truck by Chinese manufacturers Great Wall Motors in early 2012.Â  The launch saw the company become the first from China to sell its vehicles in the United Kingdom.

To date, the Steed model has a share of the pick-up market in China equivalent to one third, and has sold in excess of 700,000 units worldwide through outlets in over 100 countries. So, how have Great Wall and other similar offerings bucked the otherwise stagnant trend experienced in other sectors of the automotive industry?

Pick-up trucks have seen huge advancements in their construction in recent times, and strong competition ensures they all need to push to provide better bodies than ever before.

Whilst the enclosed van has been more prevalent in countries such as the UK in the past, the pick-up has a wider reach as the commercial vehicle of choice for multiple trades and businesses in countries around the world.

The design which features an open-top flatbed to the rear, makes it is perfectly suited for the fast loading which many trades require. This gives it greater flexibility when it comes to the transportation of goods than the enclosed rear space in a van.

The advanced construction methods used in the manufacture of pick-ups, such as a rust-proof chassis and galvanised panels, ensures a long working life with minimal maintenance worries. Modern safety systems are also included and show high attention to detail and concern for user safety.

Modern models of pick-up truck also usually exceed the specs of a comparable van when it comes to the standard of comfort and safety considerations made for the driver and passenger.

Leather interiors with heated seats are not what the average 'white van man' has come to expect and the idea of additional equipment such as Bluetooth hands-free mobile phone connectivity is not always considered either. Great Wall’s Steed pick-up offers such features as standard – providing even more benefits for business users.

High performance is another cause for the popularity of pick-up trucks in recent times. The idea that 4×4 trucks used in a work environment should be any less well equipped than other vehicles is an outdated ideology. This is thanks to developments in the automotive industry meaning buyers enjoy the benefit of comfort and practicality with these vehicles.

Success in the automotive industry, irrespective of the economic climate, always points towards manufacturers who understand current demand; the increasing popularity of the pick-up is a great example of this. 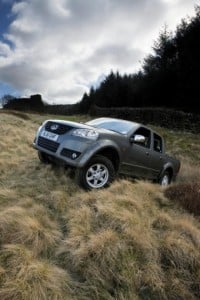 Credit rejections and the mystique of credit referencing