Speaking at the Official Monetary and Financial Institutions Forum, Charlie Bean – Deputy Governor for Monetary Policy and member of the Bank of England’s Monetary Policy Committee (MPC) and Financial Policy Committee (FPC) – considers the imbalances that led to the global financial crisis and reviews progress in returning to balance. He notes that the large extent of the imbalances before the crisis requires substantial real adjustment, and that has meant that economic recovery has been sluggish compared with the normal economic cycle.

Charlie Bean describes three types of imbalance: those within the UK economy, those between euro-zone members, and those across global international payment system.

On the United Kingdom, Charlie Bean notes that the significant depreciation of sterling should help to reduce the persistent UK current account deficit. It has had an appreciable effect on exports and imports of goods. But net trade in services has been puzzlingly weak. It may be that trade in services takes longer to respond to price changes and the benefit from the depreciation will show through in time. But there is a risk that the type of services that the United Kingdom trades are not especially price sensitive, which would imply “a less optimistic outlook”.

Turning to the euro area, Charlie Bean notes that although for the area as a whole the current account has been in balance since the euro was introduced, there have been large imbalances between members – with the periphery running large deficits, financed in large part by borrowing from core countries, especially Germany. Resolving these imbalances requires dealing with excessive debts of banks and sovereigns in the periphery, but also restoring their competitiveness “which may require a sustained period of spare capacity in the periphery and/or excess demand in the core.” He notes that “There is, however, an inherent asymmetry…that when credit flows dry up, adjustment is compulsory for the debtor but only voluntary for the creditor….the pressure for austerity is greater in the periphery, than it is to boost demand in the core….While the euro-area authorities have been making substantial progress in constructing the economic architecture to support the monetary union, the adjustment process taking place in the periphery is nevertheless likely to continue to weigh on euro-area demand prospects for some time.”

Turning to global imbalances, Charlie Bean describes the substantial and persistent current account deficits run by, among others, the United States and the United Kingdom (the deficit countries) which were funded by large flows from emerging economies, notably in Asia but also latterly the oil exporters (the surplus countries). These flows put downward pressure on safe long term interest rates in the advanced economies, which led to an easy availability of credit. That ended suddenly when investors realised the true nature of their exposures leading directly to the global downturn. He notes that we have seen some narrowing in balance of payments imbalances – both surpluses and deficits have shrunk. 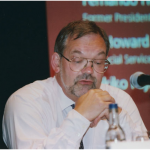 It remains to be seen whether a new balance will be achieved through persistently weak demand in deficit countries, or by stronger domestic demand in surplus countries and a realignment of exchange rates. In part that will depend upon how much damage the financial crisis has inflicted on supply side factors in different countries.

It will also depend upon the effectiveness of G20 attempts to coordinate economic policies. That has been hampered because participating countries “have not always shared the same diagnosis of the underlying problems” and because “policy makers typically do not take account of … spillovers when judging how much to stimulate their economies.” There is also “a genuine difficulty in ensuring that agreements are stuck to and free riding is avoided”.

Nonetheless, there are some aspects of the international policy process that have “worked well”. The G20 has enabled an exchange of views between countries which has helped to avoid the worst outcomes, such as a return to protectionism. It has also set the direction and tone for redrawing the scope of global financial regulation – an area where a lot has been achieved in a relatively short period of time.

5 Ways Storytelling Can Empower Your Business