Record amount of extra tax recovered from big ticket avoidance, evasion and fraud by HMRC's top team of specialist investigators – up 23% in a year

A record amount of unpaid tax has been recovered from big-ticket tax avoidance, evasion and fraud by HMRC’s top team of specialist investigators – up by almost a quarter (23%) in the last year, says Pinsent Masons, the international law firm.

According to Pinsent Masons, the compliance yield from HMRC’s “Specialist Investigations” team – its most senior investigations division – hit £3.65 billion in 2013/14, up from £2.97billion in 2012/13, making it the division’s most successful year to date.

Pinsent Masons points out that this sum alone is equivalent to10% of the estimated £34 billion UK tax gap*.

HMRC’s Specialist Investigations unit is an elite team of specialist investigators tasked with looking into the most financially significant and complex cases of non-compliance. It identifies tax avoidance and evasion, and cases of suspected serious fraud, dealing with them under civil procedures, rather than criminal, if the suspect agrees to make a complete disclosure of facts and cooperate fully with them.

The Specialist Investigations team will often be brought in to lend its expertise to sensitive or significant investigations into large corporates, High Net Worths and Ultra High Net Worths or cases where records have been falsified or complex accountancy skills are needed.

“These figures should be a massive jolt to anyone with undisclosed or outstanding tax liabilities that have given them significant savings. HMRC has been recruiting and training heavily in order to increase the activity of its Specialist Investigations Team – that new capacity is now clearly on-stream.

“HMRC is not only better equipped than ever before to chase down those it suspects of unfairly avoiding their fair share of tax, it’s also far more uncompromising in how it conducts its investigations and far more hard-nosed when it comes to settling cases.

“As well as bringing in more “missing” tax, this tough and targeted approach is also bound to increase the deterrent effect that HMRC is looking for.

“This increased investigatory capacity comes with a raft of other headline-hitting new HMRC powers, such as more criminal sanctions for offshore bank account holders and new accelerated payment measures.” 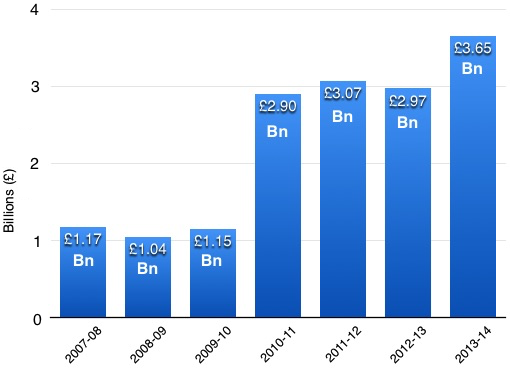 Paul Noble adds, “HMRC has come in for some criticism in recent years over offers of sweetheart deals over underpaid tax. However it has become much more consistent and rigid in how it approaches these kinds of cases, and more confident about taking the litigation route to get what it believes it is owed if need be.

“Given how much more targeted HMRC has become, individuals who have undisclosed or outstanding tax matters should seek specialist advice sooner rather than later."

Halifax unveils 0.8% balance transfer fee on All in One Credit Card