The fastest motorsport in the world, Red Bull Air Race, returns to Ascot, the world’s most famous racecourse on 15th – 16th August 2015. Tickets for the UK leg of the World Championships are available now from www.ascot.co.uk/red-bull-air-race-2015.

In its eighth season, Red Bull Air Race 2015 kicks off on 13th – 14th February with the traditional opener in Abu Dhabi and features eight stops which span the globe. This season includes the first-ever races in Japan, stopping in Chiba on 16th – 17th May and the introduction of another new country Russia, in Sochi on 30th – 31st May. Red Bull Air Race concludes in the United States with a stop in Fort Worth, Texas, on 26th – 27th September and the finale in Las Vegas on 17th – 18th October.

The Red Bull Air Race World Championship sees the world’s best pilots put to the test in a pure motorsport competition, combining speed, precision and skill. The pilots use the fastest, most agile and lightweight racing planes to navigate a predefined, low-level aerial racetrack of air-filled pylons (Air Gates) with the aim of finishing in the fastest time possible, incurring as few penalties as possible. 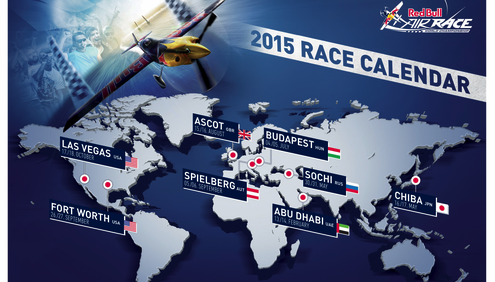 “We’re delighted to welcome the Red Bull Air Race back to the UK this summer and hope to build on the fantastic success of last year. We saw over 50,000 descend on Ascot, one of the greatest venues in the world, for thrilling day of racing led by our World Champions, Nigel Lamb and Paul Bonhomme. We’re expecting the 2015 event to be even bigger, as we celebrate the enthusiasm of the motorsport and aviation fans in the UK, where the Red Bull Air Race has a great fanbase,” said Erich Wolf, General Manager of Red Bull Air Race GmbH.

Speaking about the return to the UK Charles Barnett, Chief Executive at Ascot Racecourse, said: "This year's leg of the Red Bull Air Race World Championship at Ascot Racecourse was one of the highlights of my eight years here, and demonstrated the remarkable versatility of the venue. We had some 50,000 through the gates over the weekend and the success of the UK leg of the Red Bull Air Race received further endorsement when it was recently announced Event of The Year at the prestigious British Racecourse Association Annual Awards. I am delighted that we will be able to do it all over again in 2015!"

Adult general admission tickets are available from £30.00 per day, please call 0844 346 3000 for youth tickets (10-17yrs). For details on all packages available, including a number of different corporate hospitality packages, please visit: