There are many reasons to visit beautiful and vibrant Amsterdam. Steeped in history and unique architecture it has something for everyone. It even has one of the world's most renowned red light districts.

And visitors to Amsterdam's red light district recently benefitted from a flash dance with a difference and very hard hitting message (see video below).

The scene here is a very familiar one with scantily clad girls standing behind large windows offering their wares as men looking to pay for action and the curious peer in at them.

But this time the onlookers were in for a bit of a shock.

Suddenly, one by one, the four girls behind the glass began to dance and, despite being in different cubicles, their dance was perfectly synchronised. And for those looking up higher they would also have spotted that two more girls on the next floor had joined in.

They put on a great show to the applause and whistling of the appreciative onlookers.

But at the end in black and white was a simple and clear message. A message that stopped the smiles, cheers and whistling in its tracks.

I wonder how many of the audience went on to look for a girl to pay to fulfil their desires that night? 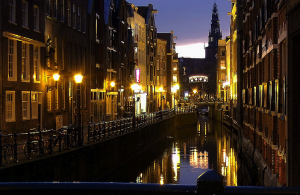 Amsterdam by drobm from Amsterdam the Netherlands via Wikimedia Commons

5 Ways to Fit Fitness Into Your Busy Workday