Every now and then, Newsnight is worth staying up for. I find the quality of the journalism is still much more variable than I remember in the old days, and politicians of any stripe make me turn off pretty quickly. But occasionally there is an interview that really catches my attention.

The piece with Reverend Paul Flowers on last night’s show was one of these. For anyone who’s been asleep recently, Flowers was Chairman of the Co-operative Bank until June last year, when the problems in the bank’s balance sheet had really started to come to the fore. Subsequently, he was caught in a sting operation by the Daily Mail buying drugs. There have also been rumours of other less salubrious activities.

The decline of the Co-operative Bank is one of the biggest tragedies of the financial crisis. Prior to its merger with Britannia Building Society in 2009, the Bank was a small bit-player in the UK’s financial landscape. Known for its ethical approach, it was never likely to challenge the big boys of the UK banking world. The 2009 merger was supposed to change that, building more of a critical mass for the combined institution, and putting it in more of a position to challenge the larger banks as a real competitor.

Ultimately, the project failed largely due to Britannia’s loan book. Britannia had lent lots of money to commercial real estate projects that was never likely to be repaid once the financial crisis took hold – regrettably, it is still one thing to fund a skyscraper in London and another to fund commercial building in the North of the country. As Andrew Bailey – the head of the Prudential Regulation Authority – said, Britannia would have failed without the merger. Unfortunately, it was also too toxic for the Co-op’s relatively safe balance sheet, with the net result that bond holders were effectively bailed in last year, and the Co-operative Group lost control of its bank (but remains the largest shareholder). 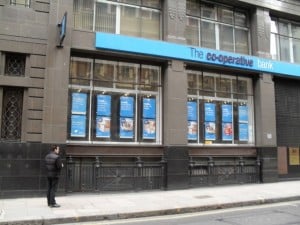 Many of Flowers’ reflections were unsurprising, yet at the same time damning. Three separate firms audited the Britannia deal, and although the problems were spotted, they were deemed manageable. The interview with regulators when he was appointed Chairman was much less taxing than the mock interview he was given in preparation. And he never saw himself as a ‘banker’ per se – he was appointed Chairman more due to his ability to forge consensus and provide oversight. Plenty of other Chairmen, and indeed CEOs, do not have particular expertise in the sectors they move into.

There were some reactionary elements – like Flowers, I am no fan of the Daily Mail, but his over-extended metaphor went too far. Several of the scars he bears stem not from the Co-op but subsequent and related events, and there was a strong political undertone to the whole interview.

But my overriding reaction was one of sadness. Here was a good man who was put into a position of power, who has since had his life picked apart in public. Was Flowers out of his depth? Probably. But he was vetted by the Group and regulators – and most of his decisions were supported by supposedly independent analysis. While he is undoubtedly the scapegoat, there is little sign that things would have been any different with someone else at the helm. Simply being in the position of running a bank has also left its mark on him – most telling was the revelation that his drug use only started after taking the helm at the Bank.

As Flowers himself said, decades ago bankers were respected, decent people, doing their best for their institutions and communities. He thinks there is a strong cadre now that adopts a much more selfish stance, focused on their own gratification; this is a view I can subscribe to all too readily, based on my own experience. But if as good a man as Flowers can be so affected by the industry, what chance do others have?

Paul Flowers is not a role model that anyone in financial services would advocate. But he does represent a crucial wake-up call for regulators – and to be frank, everyone else too. For all the regulations and capital requirements and extra scrutiny, the culture of banking remains poisonous and contagious. And until we change that, I am not sure we will ever be able to genuinely claim that we have learnt the lessons of the financial crisis.