Regional economic inequalities have increased since the recession says TUC

New research published today (Monday) by the TUC has found that London is outperforming other parts of the UK in economic and jobs growth, while the economic recovery is weakest in the North West and Northern Ireland.

Using the most up-to-date figures available, the research analyses regional and national contributions to the UK's economic and jobs growth since 2010.

From 2010 to 2013, the London economy grew more than one and a half times as fast (163 per cent) as the rate of the UK economy as a whole. By comparison, growth was only around half the national rate in Northern Ireland (49 per cent) and the North West (51 per cent).

"We need a recovery that works for the whole of the UK, but cuts to infrastructure and services have hit places that are most in need of investment. We now have an unbalanced recovery that is too weak outside of London, too dependent on families getting into debt, and too focused on jobs in low-paid service industries.

"UK regions won't become powerhouses of growth and job creation unless they are powered-up by investment in skills, infrastructure and decent public services – but the Chancellor's extreme cuts will mean pulling the plug.

"We need a better economic plan that prioritises balanced growth across the UK by targeting investment to communities that are most in need of modern infrastructure and more decent jobs." 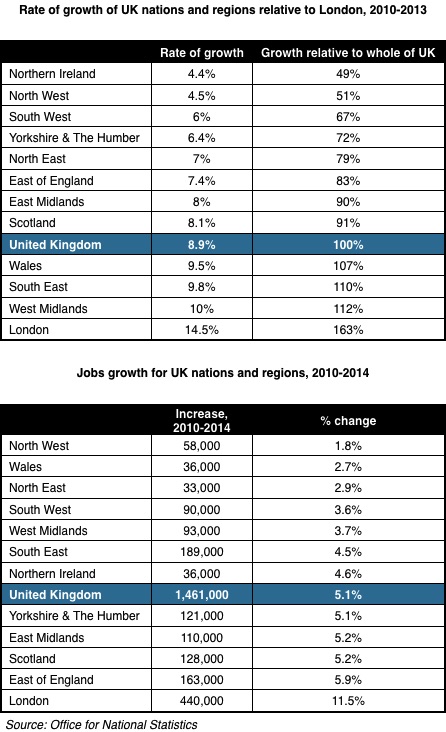 Independent Scotland: Someone's Bet On It