Under the last Labour Government, revenue from parking soared from £608 million in 1997 to £1.3 billion by 2010. Nine million parking fines are now issued every year by town halls in England. High court rulings have found that councils are raising money illegally from parking, encouraged by budget-setting guidance from the Local Government Association. Independent experts have warned that aggressive parking policies are harming local high streets and local shops. That’s why the Government is announcing plans to:

• Publish new open data on parking to allow the public to ‘go compare’.

The Government will also be consulting on proposals to:

• Review unnecessary yellow lines and the scope for residents’ reviews.

• Review the scope for extending the grace period for parking offences.

• Clamp down on anti-social driving and encouraging social responsibility. 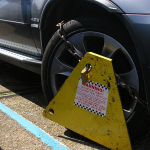 Wheel Clamp by tico24 from Southampton

“The last Labour Government told councils to hammer hardworking people with higher parking charges and unfair parking fines. By doing this Labour hurt living standards, and undermined local high streets and shopping parades. We want to rein in these over-zealous and unfair rules on parking enforcement, so it focuses on supporting high streets and motorists, not raising money. Parking spy cars are just one example of this and a step too far. Public confidence is strengthened in CCTV if it is used to tackle crime, not to raise money for council coffers.”

“Labour’s ill thought-out policies have led to an increase in congestion and parking problems on our streets. By making sensible changes such as providing more parking spaces for local shoppers we can help ease traffic flow whilst supporting our vibrant high streets. Arbitrary parking rules force shoppers online or to out of town stores, causing lasting damage to local firms and small shops.”