Boris Johnson has said that Nick Clegg, the deputy Prime Minister, should publicise government figures, if there are any, regarding predictions of the amount of immigration there is likely to be from Romania and Bulgaria when restrictions are lifted on 1st January 2014.

Boris must be running scared of UKIP.

His call came while he was campaigning for the Tory candidate in the Eastleigh by-election, Maria Hutchings, after an interview that Nick Clegg conducted with LBC Radio where Clegg appeared to admit that the government had some rough estimated figures as a starter for ten and that they would be issued if they became more accurate.

Boris then said that Clegg was a “great big vacillating jelly of indecision” over immigration and also that he needed to “discover some spine on this issue”. But surely then that would apply to the Tory part of the coalition as well?

Now call me an old cynic, but with all the number crunching that government departments do why are there no proper estimates?

Surely with our need to plan housing, roads, healthcare, education etc decades in advance then figures for the impact of opening up two more borders would need to be factored in.

So a few things seem to come out of this issue.

Firstly that there must be some figures and if there are why are they not being published. And if there are no government figures then we need to quickly clear the stable of the whole LibLabCon establishment to get people into power who will ask the right questions and then let the people know. 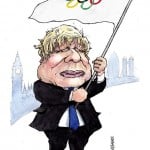 Secondly for Boris to raise this issue during his time in Eastleigh shows how worried he is over the stance that UKIP is taking over immigration and the success they are enjoying as a result. The Telegraph reports that “The candidates have repeatedly been questioned about immigration by voters worried about a squeeze on housing, jobs and public services. As Mr Johnson campaigned, a van went past showing a UKIP billboard warning of a “second wave” of immigration from Bulgaria and Romania.”

Thirdly that Boris is trying to separate the LibDems from the Tories for this local election hoping that people will forget that the person he is doing down is currently joined at the hip with David Cameron in the same government. This is not just a LibDem failing, it is also a Tory failing.