Working from home is something that many employees will have probably thought about at some time for many reasons. They might want to avoid the hellish trips to and from work, may need to be closer to the ones they love or might fail to adapt to working in a typical office because of issues relating to disability. Whatever they may be, remote working might seem pretty attractive. 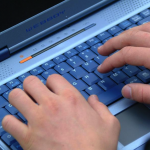 Before technology advanced to the point where being able to communicate with anyone in the world only took a couple of clicks or swipes, the idea of working from home seemed laughable. Today, it seems that remote working has found favour with employees as well as employers, especially if the results of this survey are to be believed.

So near and so far

Remote working has been made more workable now than ever, thanks in no small part to changes made in communicative technology. Faster internet speeds, social media sites, email and instant messaging have made remote working less fiddly, as has video conferencing. Most firms encourage remote working, while notable exceptions like Yahoo seem increasingly isolated in their opposition.

Worries about not being able to communicate face-to-face could become less frequent, according to international communications firm Powwownow. A spokesperson said:

“There will always be situations where a face-to-face meeting is required. However, in most cases, video conferencing is as good as the real thing.

“Being able to see the people you are talking with means that you are better able to read responses through body language. This makes debates easier and, coupled with the ability to share and review data together in real-time, increases productivity.

“We know that when working from home, the issue of trust comes up a lot. However, this can be sorted by making agreements between the employer and employee.

“We recognise that remote working can be beneficial for workers and employers alike. Employers save money while employees save time, while they don’t feel like they’ve been cut adrift by the office thanks to new technology making communication easier than ever”, they concluded.

Video conferencing technology has moved on dramatically in the past few years. as recently as five years ago, many of the images being beamed at both ends of a conversation were blocky, constantly delayed and distorted. However, with internet speeds gradually increasing and the resolution of webcams improving, video conferencing might put to bed concerns about meeting face-to-face.

Among the uses video conferencing could have for remote workers include:

* Joining in meetings from home

* Having one-to-one conversations with a line manager

* Meeting clients from the other side of the world

* Attending departmental meetings without having to go to the office

All those uses and more make video conferencing and remote working a perfect match. Without it, it looks like daily trips to the office and expensive bus/train tickets will continue to be the norm for many employees.

What is Your House Really Worth?