Renationalise the railways for the common good says Green Party

Green Party politicians including the leading candidates in the 2014 Euro elections staged rush-hour protests at railway stations up and down the country today (January 2) in support of rail travellers hit by yet another round of above-inflation rail fare increases.

The rise in rail fares, which came into effect today, sees season ticket holders paying an average of 3.1% more. The increase means fares are rising three times faster than wages for many commuters. Rail fares in this country remain among the highest in Europe.

Green Party policy is for the whole railway system to revert to public ownership.

“The rise in the price of rail tickets continues to outstrip the rise in wages. Even though Chancellor George Osborne claimed headlines by cutting the expected rise by 1%, many travellers will still find themselves paying more overall under the flex system which allows train companies to increase some fares if they reduce others. 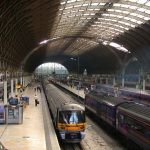 “Our mish-mash of privately owned railways charge some of the highest fares in Europe. Interestingly, though, on East Coast, the only rail company in public hands, the unregulated fares that they control are only going up by average 0.8%, in other words a real terms cut.”

East Coast was also able to announce a freeze on the cost of more than half of its journeys to and from London.

“A joined-up railway network would be an essential component of a truly integrated transport system working for the common good instead of primarily for the benefit of shareholders with passengers footing the bill."

The Green Party is the only political party fully committed to the renationalisation of the railways. In the House of Commons, Green MP Caroline Lucas has a Private Members’ Bill aimed at achieving renationalisation which is listed for its second reading on February 28th 2014.

Jack Straw is right about the Killer of Jamie Bulger