· Renault is a headline partner of designjunction 2017

A collaborative design competition between Renault and Central Saint Martins, UAL has unveiled a vision of the car of the future. Shown for the first time at designjunction 2017, which runs from 21st-24th September, the competition was part of a challenge by Renault to encourage the students of MA Industrial Design to think about the future of autonomous, modular car design, and how infrastructure and services might support it.

Renault is looking towards the future of the car industry with an emphasis on electric power, autonomous driving and connected technologies. As Europe's best selling electric vehicle manufacturer, Renault is aiming for affordable, autonomous, connected electric vehicles to be on the roads from the early 2020s. Based on these ingenious innovations, Renault tasked the MA Industrial Design students to focus on a transport landscape that is changing quickly and dramatically. 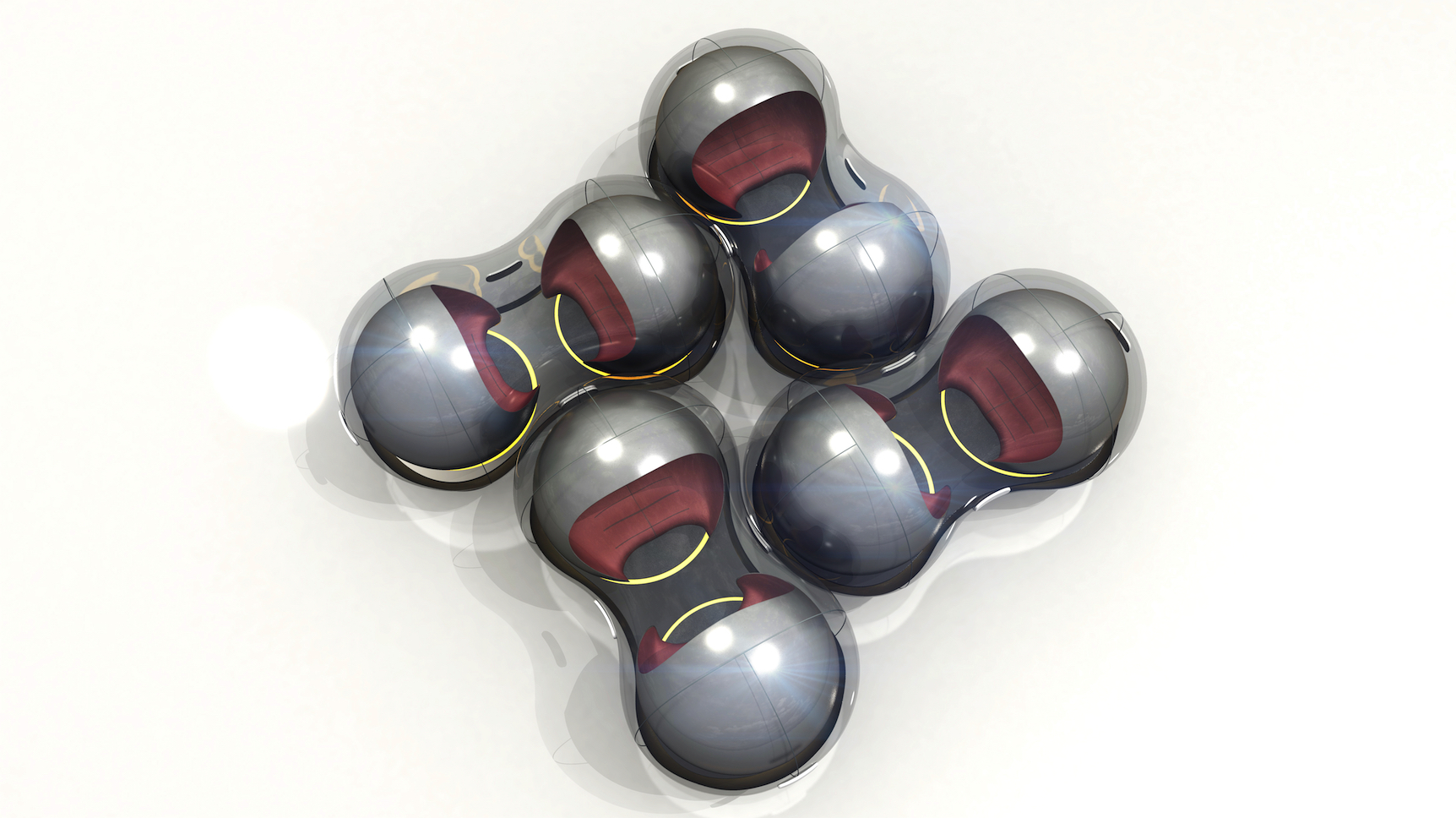 The Float by Yuchen Cai

Yuchen Cai was announced as the winning student by Anthony Lo during designjunction 2017's opening evening. Cai created 'The Float', a vision of a car that will provide a new way of connecting with people, a new form of mobility and portrays an idea of how drivers can be more open and social to the outside world as autonomy becomes ever popular. A model of this vision will be on display at designjunction between 21st and 24th September in Granary Square, in Kings Cross, London.

As the winner, Cai spent two weeks at Renault's design studios in Paris over the summer, working with senior designers to hone her idea. Whilst there, she experienced cutting-edge technology such as a full-size virtual reality suite, which puts the designer right inside the car.

"This is the second time we have run a design competition with Central Saint Martins and once again our eyes have been opened to the extraordinary talent and imagination of the students and to the ways in which humans could travel in the future. Renault is focussed on creating autonomous, connected electric vehicles and it's great to see that Central Saint Martins' Industrial Design students really took this on board when creating their vision of the future. Yuchen's winning design was particularly interesting thanks to its use of Maglev technology and its tessellated design. It was a pleasure to have her at the Renault design studios and see her vision come to life."

"It's a very great pleasure to work an important design-led partner such as Renault. For the second year, Renault has presented MA Industrial Design students with a major challenge to address. From a technological viewpoint, the prospect of vehicle autonomy is fascinating, but it's also critical to hold in mind that such opportunities also present significant challenges to how people interact and their experience of future cities. Recognition of the success of the projects here lies in their ability to describe broader conceptions of what driverless vehicles might become and how we may come to live with them." 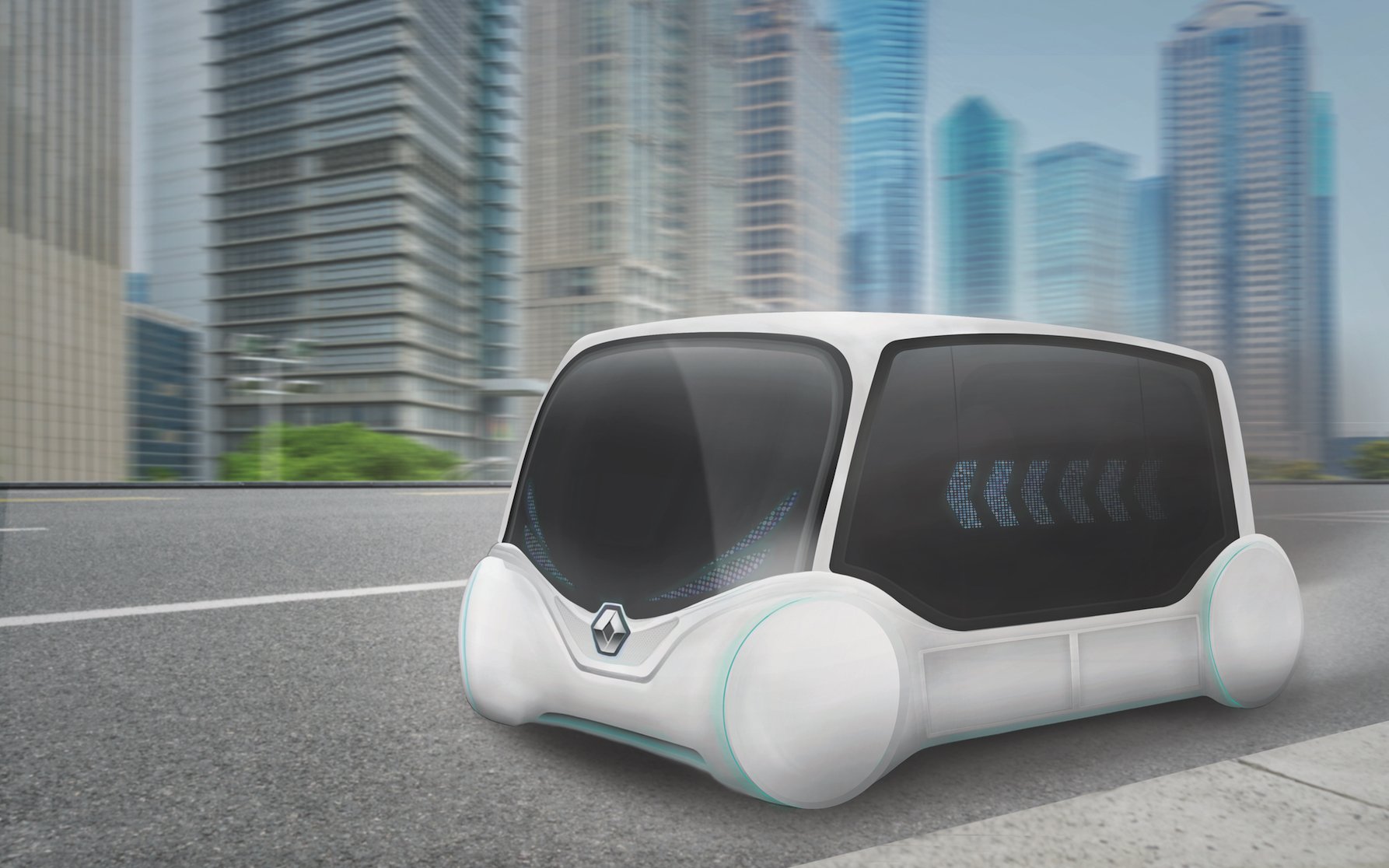 Stephanie Chang Liu's 'Flo' design incorporated three separate vehicles – one for freight transport, one for personal transport and a third for shared transport – a direction for the bus or taxi of the future. The initial concept behind Flo came from the notion of a 'seamless journey'. For Stephanie, a seamless journey meant 'a constant flow of goods and people across a city'.

Tuna Yenici created 'Vue', a unique take on establishing an emotional bond between the users and vehicles of the future. Inspired by the relationship between humans and their pets, Vue will be sad to see the owner go after its job is done for the day or greet the owner when they first get into it for the day, like a pet. 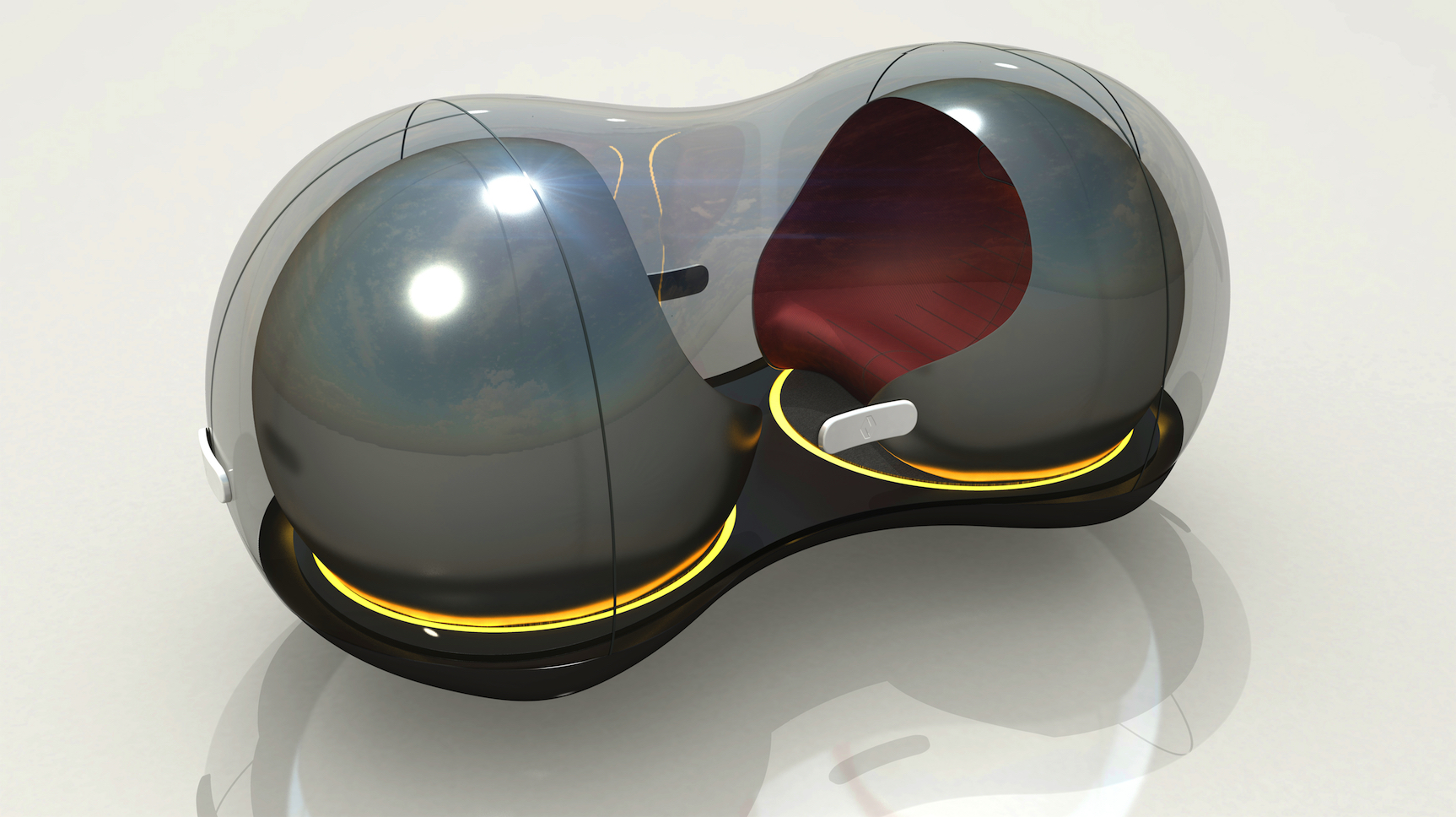 The Float by Yuchen Cai, winner of the Renault and Central Saint Martins, UAL competition

Named 'The Float', due to its form and function, Cai's vision of the vehicle of the future looks like a bubble when in transit. Rather than moving on wheels, the vehicle uses magnetic levitation (Maglev) technology. Made with transparent glass on the exterior and with silver seats, it has a futuristic design aesthetic.

The concept of the design is based around the car becoming more of a social space. In Cai's design, the car of the future provides a new way of connecting with people through tessellation, connecting with the outside world more thanks to the application of large swathes of glass and will also be 'non-directional' with the ability to move in any direction at any time without the need to turn around.

Such is the design of Cai's autonomous vehicle concept, it allows pods for either one or two people to be made. Through the geometry of these designs, numerous pods can be attached via a magnetic belt that runs around the exterior so more than two people can travel together. Ingress and egress is easy thanks to swivelling bucket seats coupled with sliding doors, akin to those found on the London Underground. A control on the seats enables the passenger to rotate their seat, open up a sound system to speak with passengers in pods connected to theirs and change the opacity of the glass – providing exclusivity or inclusivity according to the passenger's requirements.

Cai's winning idea also included a smartphone app with which users would be able to rent a Float at the touch of a button. Similar to how one would hail an Uber or other taxis in the present day, pods would be available to rent for one journey or for numerous days.

Yuchen Cai is 23 and hails from Shanghai. She studied at the prestigious Shanghai Jiao Tong University graduating with a Bachelor of Engineering in Industrial Design. On studying for a Masters in the same subject at the college, Cai said: "Central Saint Martins is my dream school, where I can immerse myself in an artistic ambience created by the city, and the faculties and students from diverse cultures. I am learning from, and interacting with, the best minds in the world. I feel really grateful to Renault for giving me the opportunity to work with them."

Renault is the headline partner of designjunction 2017, London's leading destination for contemporary interior design and culture. It is held annually during the London Design Festival and presents more than 200 world-class international brands and smaller cutting-edge design labels to an audience of design professionals (architects, interior designers, retailers and media) as well as consumers. Renault occupies a popular space in Granary Square with an innovative structure.

Renault's stand space allows a rare glimpse inside the minds of their car designers with an immersive installation entitled 'Life Designed'. The bespoke two-storey temporary edifice houses two feature projects. The winning model as well as the designs of all three finalists from the competition will be on display with interactive information on each. Upstairs, the multi-award-winning Renault TreZor concept car will be shown in the UK for the first time and displays the expansion of Renault's design strategy. The TreZor, with its welcoming style and being geared towards driving pleasure, complements the CSM finalists design display downstairs, by embodying future mobility and automotive passion.

Completely interactive throughout, the stand allows visitors to see TreZor from almost any angle around the square. Featuring an outside seating area, an exterior touch-sensitive video wall and key information on Renault's most recent concept cars and its 'Life Flower' design strategy, the stand also provides visitors with statistics on Renault's innovation in motorsport and electrification, namely as three-time constructors' champions in Formula E.

The Renault stand at designjunction 2017 is open to all visitors from 21st-24th September.

How technology is advancing the design industry