The annual rate of growth in rental values for the UK, excluding London, has continued to slow

The latest findings from the HomeLet Rental Index reveal that over the three months to October the cost of a tenancy outside of London rose by 3.5 per cent when compared to last year. Whilst this level of growth for new tenancies continues to outstrip the rate of inflation, this is much lower than the peaks seen just a few months ago when rents were up by over 8%.

The latest HomeLet Rental Index is published alongside new research into tenants' views about the rental market, conducted by HomeLet in October 2015.  The research reveals that a large proportion of tenants are renting their homes for the long term and that they value relationships of trust with landlords and letting agents. In HomeLet's nationwide survey of almost 15,000 tenants, almost two-thirds (64 per cent) said they planned to continue renting for a year or longer, and 90 per cent said they were happy with their landlord.

HomeLet's survey found that a large proportion of tenants (71 per cent) would ideally prefer to buy a home, however 66 per cent said they saw saving for a deposit as the biggest barrier preventing them from doing so.

The slowing pace of rent rises recorded by October's HomeLet Rental Index may be welcomed by those planning to sign new tenancies in the months ahead, though HomeLet's survey also reveals a broad range of factors are important to tenants when choosing a property. While 87 per cent of tenants indicated rental cost is an important factor, both attractiveness of the surrounding area (75 per cent) and a low crime rate (70 per cent) also ranked highly.

October's HomeLet Rental Index shows that the gap between the pace of annual rent rises in the capital (7.5%) and the rest of the UK (3.5%) has widened in recent months, after converging over the summer. On average London tenants paid £1,560pcm, which is over £800 more per month that the rest of the UK.

For the second month running, the HomeLet Rental Index reveals that rents are now rising most quickly in Scotland, where new tenancies over the three months to October 2015 cost 9.0 per cent more than in the same period of 2014.

While the pace of rent rises has slowed over the autumn, rent inflation has increased in nine out of 12 regions of the country – the exceptions are the North West, where rents on new tenancies over the three months to October were 4.9 per cent down on last year, Northern Ireland (2.1 per cent down) and East Anglia (1.2 per cent down).

Greater London rents versus the rest of the UK, October 2015 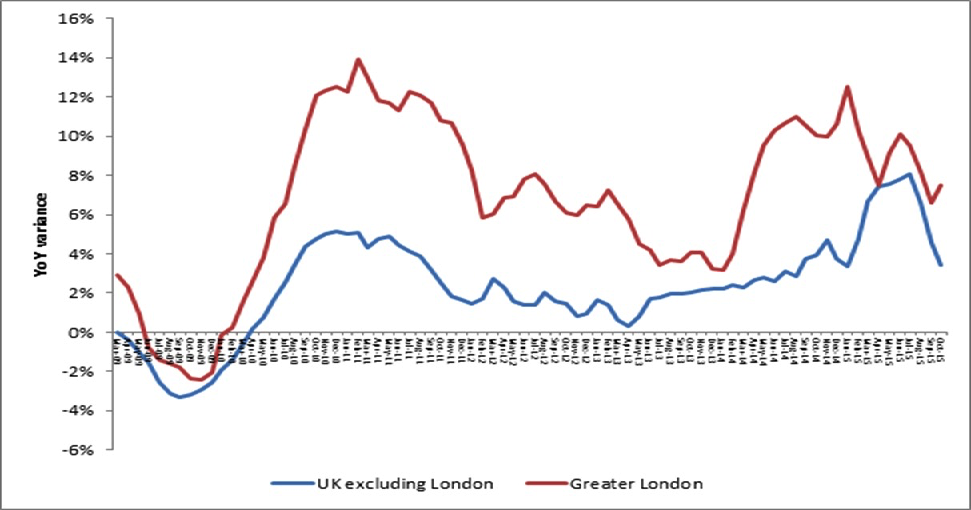 "Our survey showed that many tenants ultimately aspire to own their own home, but that just over half of them aren't actively saving for a deposit yet. 66% of those questioned said that a deposit wasn't affordable for them.

"Whilst we are seeing upward pressure on the rental market it's important that the sector continues to drive professional standards forwards for mutual benefit of tenants, landlords and letting agents." 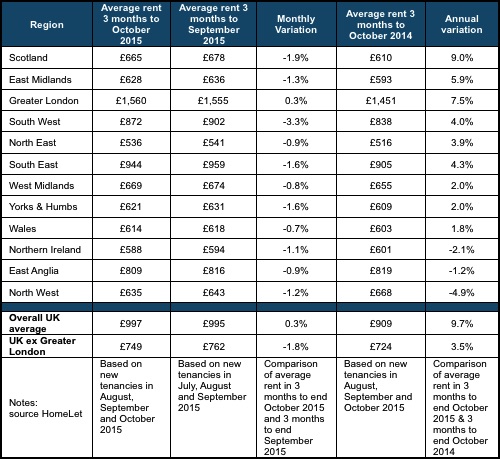 HomeLet Rental Index provides the most comprehensive and up to date data on new tenancies in the UK. As part of the referencing process for around 350,000 prospective tenants each year, HomeLet processes information including the rental amounts agreed, the number of tenants moving into the property, together with the employment status, income and age of all tenants. The trends reported within the HomeLet Rental Index are brand new tenancies which were arranged in the most recent period, giving the most relevant insight into changes in the Private Rented Sector. This is in contrast to many other rental indices which are based on all properties which are being managed, which may have had rental amounts agreed as long as two years ago.

PMQs: the most important question – will Corbyn go tie-less?