The number of owner occupier dwellings looks set to diminish over the next decade at least as more and more people are forced to rent.

The Observer reports that a Cambridge University study commissioned by the independent Resolution Foundation and the charity Shelter says that only one in four people will be living in mortgaged home ownership by 2025. The report also says that more than a third of all households will be renting by that time.

But this should not as a shock to anyone. Just over a year ago the number of people looking to rent had increased by 39% in a year.

Although house prices are fairly stagnant as can be seen from the graph in this report, wages are going nowhere fast, inflation is still high and taxes are still taking a huge chunk out of our wages, so for most people buying a house is a distant pipe dream.

Government and banks are also determined to prevent house prices falling as this would wipe value off struggling banks balance sheets. And who would lend or borrow to build assets that are losing value against inflation? So don’t expect a huge house building programme any time soon.

Although there may be thousands of empty homes around the country they may not be in the places where people need to live to work. There is now a danger that rents will rise as demand increases in certain areas and no new homes are built. The only logical result is that more people will have to be crammed into the available housing. 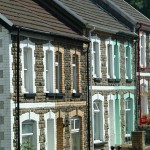 What we will see as a result are more large houses being split into apartments, even micro-flats and a rise in the number of homes of multiple occupancy (HMO).

With more people forced to take smaller living spaces tenants will need more security of tenure as well as protection from Rachmanist landlords than is currently provided by an assured shorthold tenancy.

And even those who qualify for a mortgage will more than likely have to go for a shared option to start with where they buy say 40% of the house but then rent the rest. Just take a trawl through Rightmove and look at the number of properties being offered on that basis these days at the lower end of the market.

Renting and renting small will be the new norm.