But if they’re trying to regain the public’s trust, one of the easiest and most compelling things banks can change is their language. Research* by the UK’s largest language consultancy, The Writer, finds that people prefer the writing of the younger bank brand, Metro Bank, to more established brands like Lloyds and First Direct.

Personality is crucial in attracting customers.

The survey of 2,000 people tested their reactions to a series of customer scenarios, based purely on the writing they’d encounter.

It blind-tested writing samples from three leading UK retailers and three leading banks, as well as an invented sample from The Writer.

When people were asked their reaction to retailers’ online loyalty card ads, 40% said that they most liked The Writer’s deliberately ‘really honest’ loyalty card writing. And people were on average 20% more likely to apply for a loyalty card where the writing was brimming with personality….unless you’re a bank.

But when it came to financial services, Metro Bank, the newest bank, did the best with 31% of people enticed by the writing to apply for an account with them. First Direct and Lloyds came last (16% each). When people were asked which words they associated with each bit of writing, they said: 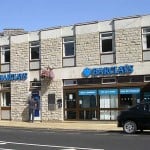 Neil Taylor, creative director at The Writer, says: ‘We upped the personality in our loyalty card writing to motivate people to apply. Our ad was deliberately bold. We even said “Shop with us (and not them)”. This approach paid off in the retail sector – but people aren’t looking for the same thing from their banks. Metro Bank appealed most to people in our banking test, and was rated for very different characteristics. People are more interested in useful, informative language (especially if it’s communicating a good deal, it seems), rather than oodles of personality.’ Neil continues, ‘It looks like Barclays’ values are a step in the right direction. A few banks have tried to be really pally in the past, but what works better for potential customers is honest content and a straightforward tone. But this research shows that “straightforward” is harder to achieve in a bit of writing than it might seem.’

*The research was conducted online by independent research company ICM in October 2012, who interviewed a random sample of 2,000 adults aged 18+. They conducted surveys across the country and the results have been weighted to the profile of GB adults.

The Writer’s creative directors are Neil Taylor and Nick Parker.

Pound under attack again ahead of inflation data