The poorest to see declining living standards up to 2020

The poorest in society will see declining living standards for the next decade says a recent report.

Although the wealthier people in the UK may well see a 2% growth in their fortunes over the next eight or so years compared to 2008, the Resolution Foundation says that those at the lower end will lose out by 5% and those that are reliant on benefits will suffer to the tune of a 19% drop in income.

The report “Who Gains from Growth” [1] makes it clear at the outset that these projections are based on what is now known to be optimistic projections of growth in the UK over the coming years. So the future may be even grimmer for the less fortunate than the report predicts.

The report, says the Resolution Foundation is “…built on the most sophisticated modelling yet undertaken in this area and presents a baseline projection of how well-off each group (those reliant on benefits, low to middle income families and higher-income households) can expect to be in 2020: their income, earnings, share of national income and employment prospects. The baseline scenario is a model of what 2020 will look like if Britain remains on its current path and there are no fundamental changes of policy direction.”

Although the number of jobs in the UK will increase by 1.5 million says the report, they will be distributed more and more at either the very top end of the high pay/high skills scale or right at the bottom. The number of middle ranking jobs such as administrative, secretarial and skilled manufacturing will decline. 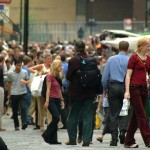 The Resolution Foundation goes on to say that boosting low wages, improving skills or raising the level of female employment could lead to ‘modest improvements’ in the situation but a combination of all three is needed to help those in the lower half become much better off. But for those people right at the bottom, for whom the majority or all of their income is state generated, these measures of course will not work. Only an increase in benefits can improve their lot while they are unable to work.