December records a steep fall in borrowing, but the deficit for 2015/16 to date already overshoots the OBR’s full-year forecast

At first glance December’s retail sales make for a dire reading, particularly given that December is such a crucial month for the high street. However, reading through the month-to-month volatility, it becomes clear that the underlying picture remains healthy, with sales having grown by 1.2% over Q4 2015 as a whole.

This was the strongest quarterly growth for four quarters and meant that 2015 as a whole saw volume growth of 4.5%, the best performance for eleven years. This strength in volumes has been driven by significant discounting and it’s notable that this hasn’t just been confined to the impact of falling fuel prices. Discounting has been widespread across the retail sector and the growth in turnover has been much less impressive.

Looking forward, the consumer outlook appears brighter than it did back in the autumn. The renewed fall in the oil price will help to keep inflation lower for longer, while the Chancellor’s Autumn Statement decision on tax credits means that the lower paid will not see a sizeable chunk of their incomes disappear in April. The continuation of consumers’ ‘sugar rush’ means that sales growth should remain strong, at least in volume terms, enabling the consumer to continue to play a central role in driving economic growth.

Public sector borrowing in December was a third down on the deficit recorded in December 2014 and the smallest December deficit since 2006. Growth in total current receipts saw the best performance in five months with decent rises in income tax and VAT revenues. Meanwhile, revenues from stamp duty appear to be benefiting from investors’ efforts to avoid the additional rate of duty that will apply to buy-to-let purchases from April. Receipts from this source surged by 13% year-on-year, a 13-month high. 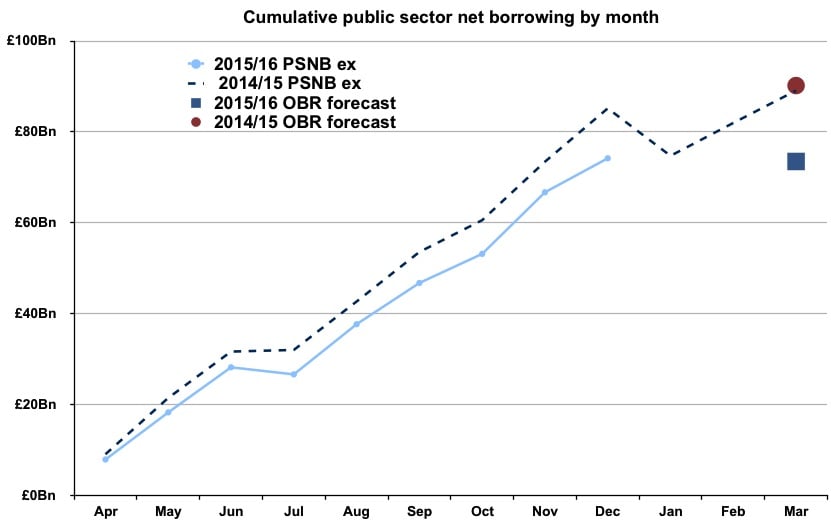 December’s deficit takes borrowing for the fiscal year to date to £74.2bn, above the £68.9bn forecast by the OBR for 2015/16 as a whole. So the public finances would need to record a surplus of £5.3bn in the first three months of 2016 for that forecast to be met. This is not completely out of the question. January, the biggest month of the year for revenues, typically yields a large surplus. And there are forces that should depress borrowing in the near-term, including in-year spending cuts which have not yet been delivered in full and the effect of policy decisions which should boost growth in self-assessment receipts in January and February.

But a January-March surplus of £5.3bn hasn’t been attained since 2002. And with growth in cash GDP currently running at a post-crisis low, there are also plenty of headwinds to an improvement in the fiscal position. Overall, we expect borrowing for 2015/16 to come in at around £75bn. So having banked an undershoot in November, the Chancellor might not be quite so lucky for the Budget on 16 March.