• A further 49% remain ‘under investigation’ a year on.

Burglary is an inherently difficult crime to solve, as without fingerprints, the police have almost no evidence to be able to pursue the perpetrator. This comes after Cressida Dick, London’s Met Police Commissioner, stated that the police will not “go in for meaningless activity" when it came to burglaries with “no investigative opportunities”.

Locksmithservice.co..uk has conducted a study analysing data from data.police.uk, to see just how many burglaries in London were closed without a suspect being identified. The research analysed crime recordings from January 2016 to December 2016, per London borough. 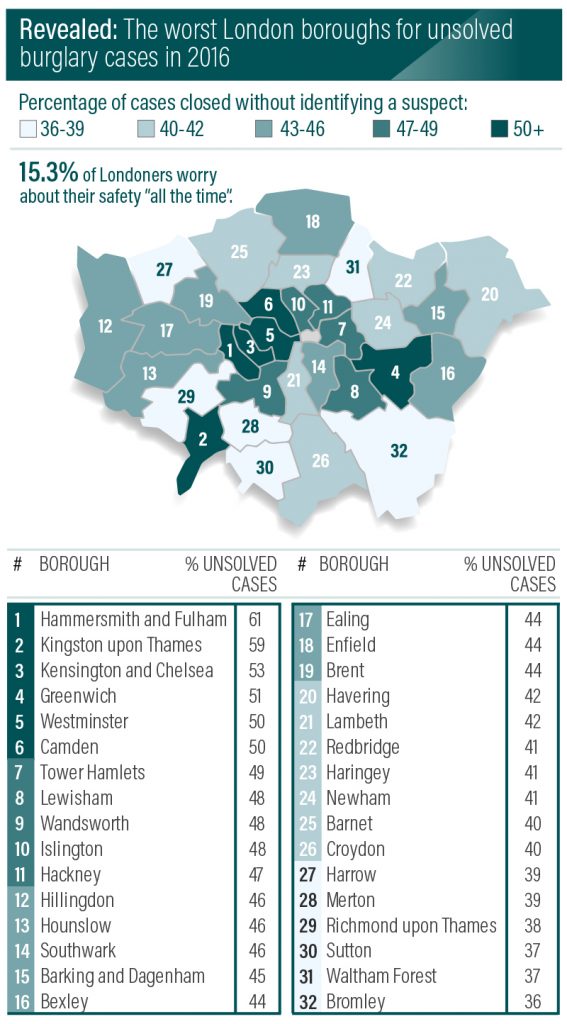 The results revealed that there were six boroughs where over half of burglaries had been closed without identifying a suspect last year. Hammersmith and Fulham was the worst culprit, with 61% of burglaries being marked as unsolved, and then closed. A close second was Kingston upon Thames, with 59% of cases closed before being solved, this figure stood at 53% for Kensington and Chelsea. In contrast, the borough of Bromley experienced the least amount of unsolved burglaries (36%). Waltham Forest and Sutton were joint second at the bottom of the table with 37% of cases closed before they could be solved.

On average 45% of burglaries were closed without ever identifying a suspect. However, this does not mean that the rest of the reported cases went to court. The study went on to find that a further 49% remain ‘under investigation’, with little chance of finding the culprit. Adding this figure to the previous 45% of ‘cases completed; no suspect identified’ reveals that 9 in 10 burglaries committed in London last year remain unsolved.

Furthermore, Chief Constable Sara Thornton warned in 2015 that if “you've had a burglary […] and the burglar has fled, we won't get there as quickly as we have in the past." It would appear therefore that burglary deterrence lays firmly at the feet of homeowners. Certain tactics, like installing a visible burglar alarm, or ensuring you have good outside lighting, are advised to ward off burglars.

• 32% of Londoners are “very concerned” about crime in London.

• 11% of Londoners do not agree with the statement that ‘London is a good place to live.’

“Break-in repairs are always a difficult call-out for us. Many of the victims of burglary that we deal with are left feeling vulnerable and frustrated by the crime, with little faith that their perpetrators will be brought to justice. After this study, we realised that many more burglars were getting away with these crimes than first anticipated which is certainly a worry for many Londoners” – Victor Baron, Managing Director of Locksmithservice.co.uk