Richard Tuttle 'I Don’t Know . The Weave of Textile Language'

The UK’s largest ever survey of the renowned American sculptor and poet Richard Tuttle takes place in London this October. It comprises a major exhibition at the Whitechapel Gallery surveying five decades of his career, a large-scale sculptural commission in Tate Modern’s Turbine Hall and a new publication. Entitled I Don’t Know . The Weave of Textile Language, this unique project has been specially devised by the artist and focuses on the particular importance of textiles in his work.

Richard Tuttle (b 1941) came to prominence in the 1960s, combining sculpture, painting, poetry and drawing. He has become revered for his delicate and playful approach, often using such humble, everyday materials as cloth, paper, rope and plywood. For this project, Tuttle has taken as his starting point one of the unsung heroes of everyday life: textiles.

Textiles are commonly associated with craft and fashion, yet woven canvas lies behind many of the world’s most acclaimed works of art and textiles are of increasing interest to artists today. I Don’t Know . The Weave of Textile Language investigates the importance of this material throughout history, across Tuttle’s remarkable body of work and into the latest developments in his practice.

The Whitechapel Gallery presents a major exhibition surveying Richard Tuttle’s career from the 1960s to today. He is renowned for being one of the first artists to make the radical gesture of taking the canvas off the stretcher and hanging it directly on the wall in works such as Purple Octagonal 1967, as well as making provocative sculptures such as Third Rope Piece 1974, the intimate scale of which directly responds to traditional ideas of monumental art. 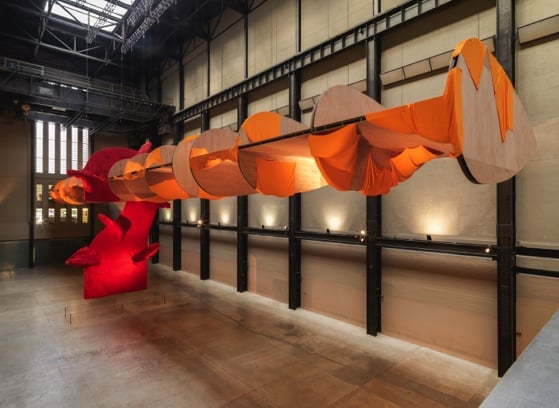 Showcasing works selected in close dialogue with the artist, the exhibition centres on his use of fibre, thread and textile and offers a fascinating introduction to Tuttle’s influential body of work. The exhibition includes Looking for the Map 8 2013-14, a new work shown in the UK for the first time, alongside works made in situ by the artist such as the re-making of Ten Kinds of Memory and Memory Itself 1972, as well as international loans from museums and private collections.

Rather than displaying the works chronologically, the artist has instead positioned works in a formal relationship to each other and in direct response to the architectural framework of Whitechapel Gallery’s historic exhibition spaces. A concern with colour, line and movement runs through Tuttle’s intuitive presentation which occupies both ground and first floor galleries, featuring works ranging in scale from the intricate series of Section, Extension wall pieces to the 3-metre long floor-based sculpture Systems VI 2011.

Alongside this exhibition, Tate Modern presents a newly commissioned sculpture in its iconic Turbine Hall from 14 October 2014 to 6 April 2015. Principally constructed of fabric, it is the largest work ever created by the artist, measuring over twelve metres in height. It brings together three specially-made fabrics, each of which combines natural and man-made fibres to create different textures in bright colours. These are suspended from the ceiling as a sculptural form, contrasting with the solid industrial architecture of the Turbine Hall, to create a huge volume of joyous colour and fluidity.

A new book is published as part of this project, drawing on Tuttle’s knowledge as a longstanding collector of textiles from around the world. It includes contributions by the artist and new essays by Magnus af Petersen, Chief Curator, Whitechapel Gallery and Achim Borchardt-Hume, Head of Exhibitions, Tate Modern. The publication brings together photographs of Tuttle’s personal collection of textiles, images of works from the Whitechapel Gallery exhibition, and documentation of the sculpture at Tate Modern.