Perceived as an invitation from an advanced culture to visit them, the scientists enlist the finances of aged industrialist Peter Weyland (Pearce) to fund a scientific expedition aboard the research vessel Prometheus and journey to the far flung reaches of the cosmos.

Under the ever watchful scrutiny of commercial director Meredith Vickers (Theron) and android scientist David (Fassbender), the crew of the Prometheus not only discover a link to the evolution of mankind but also the origin to a new and deadly genetic strain that may have wiped out it's godlike engineers.

Prometheus was the Greek deity who created man from the earth in the image of the gods and bestowed upon him the gift of fire, inflicting the anger and retribution of Zeus.

An epic origin story and in naming the prequel to his seminal science fiction feature, Alien (1979), after that myth, director Ridley Scott finally sets out to explain the origin of that creature, it's seemingly doomed god like creator and the link to the evolution of mankind

Prometheus commences on a scale of almost mythic proportion with an alien demigod spilling his genetic code into the rivers of an evolving planet that may or may not be Earth and proceeds to gradually reveal the connection to that fossilised star traveller (dubbed the space jockey by several decades of fans) and his deadly biological cargo, first glimpsed on a desolate and distant planet in Alien.

There is the danger that, in explaining the origin to that infamous species and the location first visited in the original movie, some of the mystique found in an established classic may be stripped away. An exercise in film making that is more often met with derision rather than praise from audiences.

But Scott knows that the diehards have constantly theorised over the cryptic images and origins to that creature ever since Alien first graced the big screen with the veteran director not only committing to some tried and tested themes of the science fiction genre but also ensuring that another visually stunning world is created.

The scenes of the cosmos and the journey of the Prometheus across space alongside the vast alien vistas on show demand to be seen on the biggest screen available.

Sigourney Weaver and her corporate bitch turned heroine, Ripley, played at the heart of the original movie but this time around the female lead is split into the polarising roles of the wonderfully named Meredith Vickers (Theron) with her ice queen business sensibilities playing directly opposite Shaw (Rapace) and her wide-eyed scientist turned reluctant heroine.

In a film that mainly keeps one foot in the serious sci-fi quarter and another occasionally in the blockbuster horror camp, it's Rapace who has the chance to mirror John Hurt's legendary stomach exploding scene in Alien with a do-it-yourself hi-tech caesarean procedure that is almost certainly inspired by Rosemary's Baby (1968) and destined to put many a viewer off their next dish of calamari.

Guy Pearce, almost unrecognisable under layers of prosthetic makeup, continues the corporate theme featured in Alien with his aged industrial monarch attempting to experience the one frontier left to mankind, that of literally meeting his maker in his own lifetime whilst the character also bears similarities to the god like bioengineer and businessman Tyrell featured in Scott's other seminal classic, Blade Runner (1982).

The assembled and varied collection of stereotypical crew members, wayward scientists and corporate types alongside Idris Elba's gruff ship captain all seem destined to clash with each other whilst providing the necessary screen fodder for some unpleasant deaths in their newfound alien landscape.

But essentially the moment belongs to Fassbender and his android creation that is the latest in line of humanoid robots brought to the screen by Scott. Fassbender portrays David as a cold and calculating wide eyed child at large in a human world. Asexual and inquisitive to the point of being dangerously deviant, his performance is a worthy addition to the straight laced and steely nature of Ash (Ian Holm) in Alien and the angelic killing machine qualities of Roy Batty (Rutger Hauer) in Blade Runner.

With the combined themes of creation, evolution, vengeful gods, corporate power and artificial intelligence, Prometheus ultimately plays more for gradual suspense and revelation rather than giving us the all out shock treatment of Alien.

The fact that such themes have already been covered by the genre for several decades, not least by Scott, ultimately ensure that Prometheus emerges not so much as the game changer that some hoped for but rather as a classy slice of old school science fiction.

It may disappoint those looking for the shock factor and some may work out what it all amounts to at the very start of the movie, but there's no denying that Prometheus is a visually stunning piece of cinema that encompasses the classic Frankenstein themes found at the heart of science fiction whilst linking neatly into Alien.

A beautifully envisioned albeit sturdy return to the science fiction genre for the veteran director, Prometheus may not be the ground breaking spectacle heralded by many but the film contains enough suspense and highbrow themes to prove itself a worthy prequel to its esteemed predecessor. 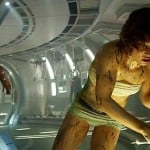 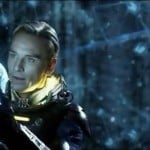