Rightmove has reported the largest August fall in property asking prices that it has seen as the average asking price drops by Â£5,837 to Â£236,260.

Despite the Olympics, says Rightmove, new sellers were not put off from getting their houses onto the market so August saw a marginal increase in new supply over August last year.

But it was a different story with the potential buyers. “Home-hunters disengaged from their property search activity at key moments during the Olympics, with opening and closing ceremonies and ‘Super Saturday’ seeing plunges of up to 50% in Rightmove traffic.” The company said.

This latest fall of 2.4% comes on the back of last month’s reduction of 1.7%. But when looking at a longer term trend things do not look so stark. The graph below shows Rightmove asking prices since Jan 2007; that is from before the credit crunch and you can see that the overall trend has been very slightly upwards. 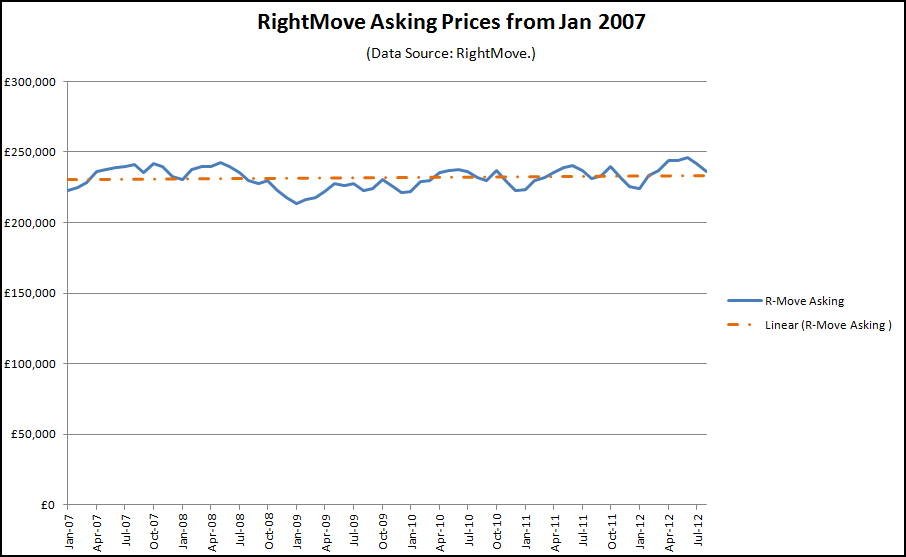 We must also remember that these are asking prices. That is they are what the seller wants to get or must get on the sale. The only thing likely to change this picture would be an increasing number of ‘forced sales’ coming onto the market from debt problems caused by such things as redundancy or wage freezes/reductions hit by inflation.

Rightmove director and housing market analyst, Miles Shipside, commented: “The Olympics may have focused the nation’s attention on sporting goals in the last month, but for over 120,000 new sellers their goal was to sell their property. One would perhaps expect some sellers to have postponed their marketing plans until after the Olympic distractions, though with more ‘working from home’ it may have given them an opportunity to begin their property move a few weeks earlier in readiness for the hoped-for upturn in buyer activity in the lead up to Christmas. The number of new sellers is slightly up on the same period last year, though perhaps as a reflection of their urgency to sell, or to compensate for the distraction of the achievements served up by Team GB, they have dropped their asking prices more aggressively than summer sellers in previous years.”

Rightmove then goes on to give one house selling tip – ‘get the Marigolds out’ and make sure the kitchen and bathroom are in good clean order as dirty kitchens and bathrooms are the things most likely to put buyers off.