Singer Rihanna has decided to deface herself even further with yet another tattoo of Egyptian religious iconographyÂ to match the one on her ankle.

There is aÂ growingÂ level of speculation on the internet about Rihanna using occult/satanicÂ symbolism in her stage shows, videos andÂ photo-shoots.

And it appears that she has decided this time to go for a body ink representation of theÂ EgyptianÂ goddessÂ of Isis in a kneeling pose with wings outstretched to match the Egyptian falcon tattoo which she has on her ankle.

The Isis tattoo, which stretches across her ribs just below her breasts, is supposedly dedicated to her late grandmother Clara Braithwaite who died earlier on this year and has been posted by Rihanna onto Instagram saying "GoddessÂ Isis- Complete Woman – Model for Future Generations- #GRANGRANDOLLY – always in and on my heart".

Rihanna has also been spotted wearing a rather large surgical plaster to cover the offending tattoo whilst her body recovers from the tattooing procedure.

The Umbrella singer has previouslyÂ drawnÂ from esoteric occult symbolismÂ in her videos and there is a plethora of videos on the internet questioning using such symbolism in music videos.

Connections between occult/illuminati and Egyptian symbolism are currently the centre of much debate suggesting there is possibly more belief tied into Rihanna's Â use of theseÂ symbols than just using them for dramatic effect, but her awareness of the implications of suchÂ symbologyÂ is unknown. 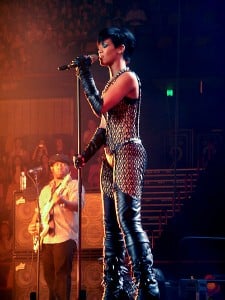