Today (July 7 2017) Ringo Starr celebrates his birthday at Capitol Records. Family, friends and fans will join Starr in front of the Capitol Records Tower in a noon "Peace & Love" salute. Satellite salutes and events are happening all over the world, including at London's Abbey Road Studios and at Liverpool's Cavern Club, many of which can be streamed at https://www.facebook.com/ringostarrmusic.

Ringo also reveals details of his 19th solo album, Give More Love, which will be released September 15, 2017.  Recorded at his home studio in Los Angeles, Give More Love has 10 new tracks featuring collaborations with friends including: 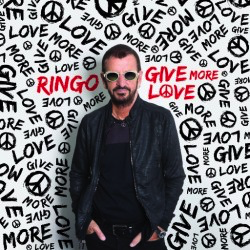 Laughable – co-written and performed with Peter Frampton as well as Benmont Tench, Timothy B Schmidt, Richard Page and Amy Keys

Bonus tracks include: Back Off Boogaloo, You Can't Fight Lightning, Photograph and Don't Pass Me By.  This version of Back Off Booglaloo is based on the original recording Ringo made when he wrote the song. He recently discovered the tape when he moved houses. The other three bonus tracks are collaborations based on performances from Starr's 2016 Peace & Love Birthday event. Alberta Cross performed You Can't Fight Lightning and Vandaveer performed Photograph and Don't Pass Me By. Starr loved their renditions and asked them to each record them for his new album, also adding his own vocals.

In October Starr will hit the road in the US with his All Starrs, the same beloved line up he has performed with since 2012: Steve Lukather, Todd Rundgren, Gregg Rolie, Richard Page, Warren Ham and Gregg Bissonette. The tour will include a residency at Las Vegas, NV @ Planet Hollywood Resort & Casino. See www.ringostarr.com for full tour dates.

The heir to the throne of Henry VIII, Henry Fitzroy