More than one million whales, dolphins and porpoises have been slaughtered off Japan in the past 70 years – and new analysis by the London-based Environmental Investigation Agency (EIA) indicates these unsustainable hunts are on track to wipe out key species in Japan’s coastal waters.

Launching its new report Toxic Catch: Japan’s unsustainable and irresponsible whale, dolphin and porpoise hunts at a press conference in Tokyo today (October 31), EIA urged the Government of Japan to phase out the hunts over a 10-year period through targeted actions to restore depleted cetacean populations and working with hunters to find alternative livelihoods.

Japan’s hunts of small toothed whales, dolphins and porpoises (known as small cetaceans) constitute the largest directed hunt of cetaceans in the world, yet there is little transparency regarding the methods used to set catch limits and widespread concern that consumers are not informed that the resulting products are toxic with mercury and other contaminants.

“For 2013, the catch limits allow the slaughter of 16,655 small cetaceans, but our analysis of available scientific data raises very serious concerns about the sustainability of these hunts.”

Favoured species such as the striped dolphin began to decline drastically due to overexploitation long before catch limits were introduced in 1993. Actual catch numbers have since declined to below these limits for most targeted species; this is due in part to falling consumer demand, but there is significant evidence indicating that a number of exploited populations are too depleted to allow quotas to be filled. 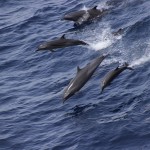 “Despite strong indications of population declines, there appears to be little formal monitoring by the Government of Japan,” added Baulch. “For most hunted species, the majority of population estimates are based on surveys more than 20-years-old.

“In using outdated population information and lacking a scientifically rigorous method for setting catch limits, the Government is displaying a lack of responsibility and is failing to implement its own policies of sustainable utilisation.“

In addition to sustainability concerns, Japanese consumers are left largely ignorant of the high levels of pollutants which typically accumulate in the meat and blubber of these top marine predators; some products can reach 85 times the safe limits for consumption of methyl mercury and 140 times the safe limit for polychlorinated biphenyls (PCBs) – particularly shocking in light of the recent signing of the Minamata Convention on Mercury in Japan.

Sakae Hemmi, of Japanese NGO Elsa Nature Conservancy, said: “The Government of Japan’s stubborn reluctance to relinquish this archaic industry is not only driving threatened marine species towards extinction, but is endangering the health of its people.”