Capital market participants focused on a deal struck over the weekend where Iran agreed to limit its nuclear programme in return for the reduction of sanctions. Traders cheered the agreement lifting global equity bourses and allowing riskier assets to increase in value. Commodities on the other hand were under pressure as investors exited long positions in oil, sighting reduced supply concerns in the Middle East. The Nikkei notched up a 1.5% gain on Monday, starting the day on a positive not for global equities.

The interim deal between the UN Security Council and Iran is that Iran would agree to freeze its nuclear program and that the five permanent member of the Security Council would ease some sanctions. A permanent accord would require each side to go much further.

The deal calls for Tehran to curb central parts of its nuclear program which entails freezing its production of nuclear weapons grade fuel which is uranium enriched to 20% purity and to remove its stockpile of the fissile material.

While deals with Iran will likely calm tensions, China's new East China Sea Air Defense Identification Zone threatens to escalate them. China's initiative is a unilateral attempt to impose new rules on the airspace of the islands whose ownership is disputed, especially with Japan. 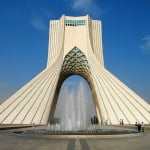 Oil prices continued to face pressure on Monday on the heels of the agreement with Iran. The perception is that an agreement will allow Iran to pump more oil and therefore bloat current supply which will in turn reduce the value of petroleum products. In the latest week, crude oil traders increased long position in crude oil futures and options while reducing overall short positions. According to the latest commitment of traders report, managed money increased long positions by 1500 contracts while reducing short position in futures by 8K contracts.

Equity bourses globally continue to benefit from an accommodative monetary policy in Japan, Europe and the US. US data continues to be mixed, with some releases reflecting an economy that can handle the reducing of the Federal Reserve bond purchase program and data also showing that even more stimulus might be needed. Last week the Philly Fed survey was weak, while the jobless claims report showed strength. It is unlikely that the Fed will begin its tapering prior to Janet Yellen taking the helm in March which would keep US equity indices buoyed until that time.

In Europe the ECB is considering many steps to further accommodate the economy. Negative real deposits are now considered to get investors to exit bank deposits which could stimulate riskier assets. In Japan the BOJ continue its QE, which has pushed the Nikkei toward 2013 highs. 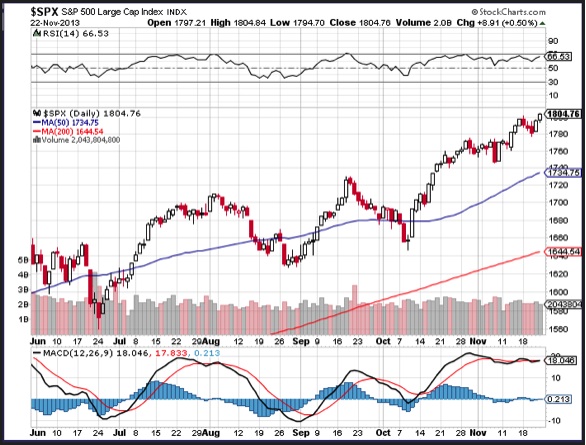 Analysis from Marcus, Editor of Bonus.org.uk: On Friday the S&P 500 index touched a new all-time high closing above the psychological barrier of 1,800.  Momentum on the large cap index is strong with the MACD generating a buy signal.  The RSI (relative strength index is printing near 66 which is on the upper end of the neutral range.

The UK’s potential trillion euro counter-claim against the EU

Are IT contractors essential to UK businesses?