The former Labour Home Secretary, David Blunkett, has warned that an influx of Roma migrants could spark city riots.

He is calling on the Roma to ‘change their culture’ because dumping rubbish, loitering in the streets and not sending their children to school could result in ‘frictions’ with the local communities.

His own constituency in Sheffield has experienced this, which has caused ‘understandable tensions’ he said and locals have set up street patrols to try and prevent anti-social behaviour by the Roma.

This coming from one of the architects of the situation, the phrase ‘hoist by one’s own petard springs to mind’.

But ponder, if Nigel Farage, or any UKIP member for that matter, had uttered these words there would have been an instant reaction and they would have been roundly condemned by the other parties and accused of every ‘ism’ and called every ’ist’ under the sun. Did you watch the last BBC Question Time? I haven’t heard anyone telling Mr Blunkett that he should be informing us all how enriched Sheffield has become.

Now, I remember somewhere in the dim and distant past a Tory politician gave us a warning ….. whatever happened to him?

But it matters not what warnings are made now, the law is set in stone and the stage is set for what is actually a totally uncertain outcome. Because the UK now has no control over its borders with Europe the authorities have absolutely no idea how many people will come into the country and that is the problem. It’s not ‘the who’ and ‘where from’ but the ‘how many’ and their ’needs’ as well as what they are expected to contribute to society.

How can plans be made for housing, education, hospitals and other local support if we don’t have a clue how many people will be here in two months time? Or their demographic make-up for that matter. 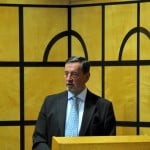 If none or a few turn up the government will breathe a sigh of relief and say ‘we told you so’, but if lots arrive then they’ll wring their hands and ask local communities to be tolerant – or more probably try and ignore it hoping time will sort it out for them.

Instead of controlling the situation the government have been forced by EU law into a 'sit back, suck it and see' sort of posture in the hope that, if there is a storm of immigration, we can quickly ride it out and react where needed.

That of course doesn’t help those who actually have to live through it and if they believe that the government has left them to get on with it who knows where that might lead. Would we see huge numbers of police bussed into problem areas? Contingency plans are probably already be in place for this sort of outcome. How would that help the situation except by further inflaming it?

As David Blunkett said ‘We saw this is Bradford, Burnley and Oldham all those years ago when I first became Home Secretary. If things implode it’s not outside here that cops it, it’s the community.’

Sex for money is legal – for some