Apple is still refusing to admit to customers that its products contain tin that’s destroying tropical forests, killing coral and wrecking the lives of communities in Indonesia, Friends of the Earth reveals today (Saturday 6 July 2013).

This comes as activists from the environment charity plan undercover visits to Apple stores to raise awareness among customers this weekend.

Tin is used as solder in all phones and electronic gadgets and around a third of the world's tin comes from Bangka and neighbouring island Belitung. Friends of the Earth’s investigation has revealed:

Dangerous and unregulated tin mining on Bangka – Police figures show that in 2011 an average of one miner a week died in an accident.

Farmers struggling to grow crops – Soil has become acidic after the destruction of forests for tin mining.

Following previous pressure on Apple from Friends of the Earth, the notoriously secretive technology company helped set up a new industry stakeholder group discussing urgent action to tackle the problem. Yet it is still refusing to give a straight answer to more than 24,000 customers who have asked if it sources tin from Bangka. Its current policy is to refuse to confirm or to deny that it does.

Friends of the Earth’s Policy and Campaigns Director Craig Bennett has written to Apple CEO Tim Cook pointing out that the company’s public stance on the issue is now “indefensible,” especially given his commitment to being more transparent about Apple supply chains.

In April, rival Samsung Electronics publicly admitted for the first time that it uses tin from Bangka’s mines, following pressure from Friends of the Earth and more than 15,000 individuals. Earlier in the year Dutch electronics giant Philips publicly acknowledged its use of Bangka tin after similar pressure from Friends of the Earth Holland (Milieudefensie).

Alongside Apple, Philips and Samsung have joined a new partnership between Dutch government agency the Sustainable Trade Initiative (IDH) and the Electronics Industry Citizenship Coalition (ElCC) to work with suppliers and governments to improve the situation on Bangka and neighbouring islands. Friends of the Earth has also been attending these meetings, but due to confidentiality agreements is unable to divulge their contents.

“Unlike Samsung, Apple is still keeping its customers in the dark by refusing to confirm or deny where the tin in iPhones and iPads is from.

“Apple has helped set up an industry group looking into tin mining problems on Bangka island. This is welcome, but until it publicly admits using forest-trashing tin in its products customers can’t be sure it will commit to helping end the devastation.

“We believe Apple customers care about the environmental and social costs of how their devices are made and that with this rotten refusal to tell them the truth Apple is risking its reputation for high standards.

“CEO Tim Cook has said he wants to be more transparent about Apple’s supply chains – it’s time to show he means this by coming clean about Bangka tin.”

To prevent problems elsewhere and help ensure companies make products in a way that’s within the planet’s safe limits, Friends of the Earth’s Make It Better campaign is also calling for a strong new European Union Directive on ‘non-financial reporting’, requiring companies to reveal the full human and environmental impacts of their operations. 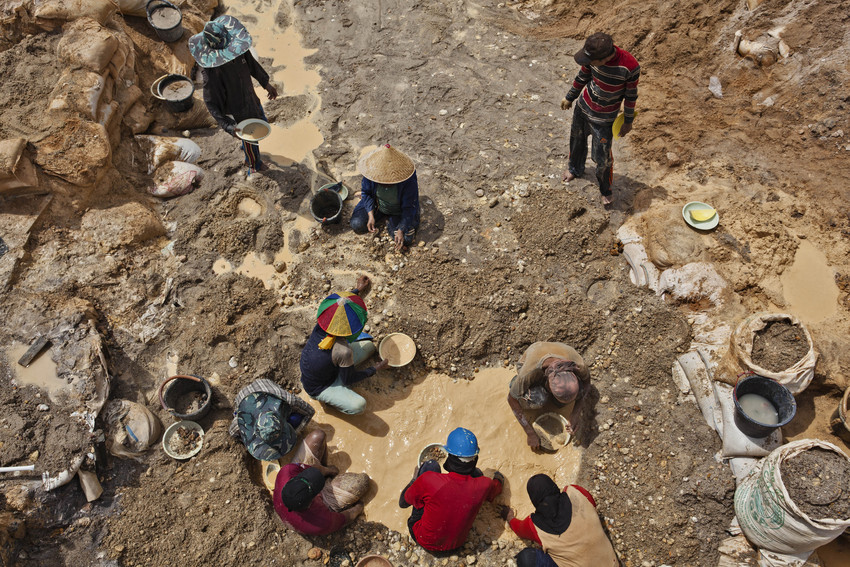 Miners working at a tin ore mine in Tanjung Pesona, District Sungai Liat, Bangka, Indonesia. The country is the world's largest exporter of tin, and 90 per cent of it is from Bangka-Belitung province