The government may like the Royal Mail sell off and those that could afford the shares are no doubt also now celebrating their windfall but many people are not so happy about it.

As has already been highlighted, the shares were hugely underpriced and a valuable institution has been sold off to the detriment of the common good.

And stories like this one in the Telegraph about Peter Davies and the Chancellor, George Osborne do not help either.

"No one can be blamed for wanting a share of that, but let's not forget that this has taken something that belonged to all of us and given a large slice away for free to those who could afford an entry ticket. And everyone knows that in the long run the postal service will get worse, just as other privatised industries have ended up abusing markets and ripping off consumers."

But selling fivers for four quid means a loss of 20 percent, when in fact the difference in this case is nearer 36 percent.

The Green Party also condemned the sell off of the 500 year old national institution.

"This is a sad day for Britain. A valuable public asset, providing an essential public service, has with great haste and little planning been handed over to private hands.

"While the government has claimed to have favoured small shareholders in the fire sale, 67 per cent of shares have gone to big institutions. The government's friends in the City will no doubt be celebrating today. 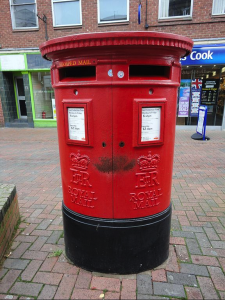 "Our common wealth has today been depleted, the common good damaged. Future generations will marvel at the damage being done by the rush to insert the market into further areas of British life, even when it was clear that the privatisation of the railways, utilities, prisons and many more areas of unlicensed life had been a disaster."

Deputy Leader Will Duckworth joined Bennett in voicing his opposition to the privatisation:

“The ideological decision to sell off our national public treasures was started by the Tories and accepted by the Labour Party. Our Emergency Motion to keep the Royal Mail in public hands, that we past unanimously at Green party Conference, shows that the Green Party is the only political party dedicated to ensuring that quality public services are kept in public ownership for the common good.”