Robert Pattinson and Kristen Stewart have beenÂ photographed in close proximity to one another causing the press to write reams about theÂ irrelevantÂ event.

TheÂ male and female actors were seen together in an establishment calledÂ Ye Rustic Inn in LA where they were … errm … eating with friends and being rather normal people.

Lost the will to live yet? WellÂ I haveÂ writingÂ this tripe.

Anyway the two were wearing their usual casual scruffy baseball hats and denim jeans and tracksuit bottoms. It is thought that the press has decided to take photos of these two individuals because they play lovers in theÂ Twilight films and they have also dated in real life.

However said relationship that has not been going so well recently since the female of the two decided to play hide the sausage with Rupert Sanders who is the director of another film (not Twilight but similar fantasyÂ escapism).

Apparently the couple have reconciled their differences since Kristen shared intimate moments with someone that convention deemsÂ inappropriateÂ and this news is of great significance to many people on planet Earth who areÂ dissatisfiedÂ with their ownÂ existence.

Robert and Kristen will attend the marketing chaos to promote the latest film which they both star in.

TheÂ TwilightÂ films are fantasy films about people who can live forever providing they drink blood, men who can change into large wolves, a human and the ensuing love triangle that revolves around the aforementioned roles.

But it is also rather dull and more suited to spotty teenage kids who are rather angry at their parents and can thereforeÂ fantasize about having the ability to do superhuman feats as a means of distraction from being sent to their bedroom to do their homework. 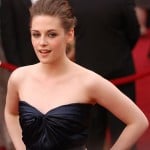 However, it is uncertain why anyone is interested in the personal lives of these two individuals and why their lives should be documented as such but it could be part of what is known as the 'celebrity culture'.

This is where persons who usually find their talent is somewhat stunted find themselves thrust into the public limelight.

By someÂ miracle the public then find themselves following these people's lives because the media's constant reporting makes said public believe that theÂ talentless individuals are actually worth following.

This has resulted in a general dumbing down within society and lowered the quality of entertainment.

And that is why the press today decided to show pictures of two actors in close proximity to one another.