The American culture clash between its inherent religious communities and the modern society has become somewhat of a favourite subject matter for both the big and small screen since director Peter Weir and Harrison Ford teamed for their superior thriller Witness (1985).

In director and writer Rebecca Thomas' debut indie flick, the contrast between differing belief systems and lifestyles is examined yet again in a story that finds Mormon teenager Rachel unearth a cassette of rock music deemed forbidden by her father.

Discovering herself to be pregnant three months latter, the teenager decides to runaway from the isolated community to the bright lights of the big city to track down the recorded voice she believes is responsible for her immaculate conception. (Trailer below)

Pregancy by rock music is a bizarrely strange theme and perhaps Thomas has struck gold in casting Julia Garner as the central protagonist, the upcoming actress has already received acclaim for her work in the highly recommended drama thriller Martha Marcy May Marlene (2011).

Liam Siken and Cynthia Watros add to a cast that also includes Rory Culkin leading a band of modern day teenagers offering an alternative way of life to Rachel amidst the urban sprawl of Las Vegas.

Rounding off the ensemble is seasoned actor Billy Zane adding some weight and experience to proceedings as the somewhat concerned but seemingly dour community pastor and father to the waywardly pregnant teen.

Elsewhere, the use of the occasional neon city light and an all too American rock soundtrack gives this teaser the feel of a vintage Sofia Coppola movie circa Lost in Translation (2003) and may allow the film to find a niche audience.

The contrast between the somewhat rurally stagnated environment of the Mormon community and the progressive albeit dangerous modern glow of Las Vegas should also provide a key ingregient and edge to this strange coming of age tale.

Footage shown during the teaser is seemingly accomplished and refreshingly devoid of any Thistletown gloss, indicating that Thomas will neither patronise or stereotype her depiction of the religious community, allowing the viewer to take this unusual mix of modern nativity story and road movie as a serious proposition.

All bodes well for the feature and you may wish to check out the wonderfully retro inspired and stylised movie poster promoting what may be a welcome alternative to the now customary weekly blockbuster overload.

Electrick Children is released in UK cinemas on 13th July 2012. 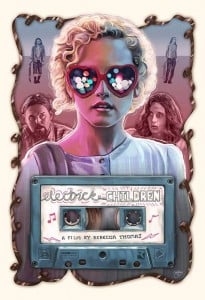 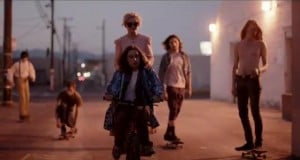