A living room scene – complete with sofa, plants and coffee table – was set up inside a Barclays bank branch in York yesterday (24 October) by a mother and daughter from Ryedale in protest against Barclays’ involvement in a proposed fracking project near where they live.

Barclays own Third Energy, the company holding the licence to frack in Ryedale, and the bank also invests in fossil fuel extraction around the globe.

Nicky Hollins and her daughter, Ruby, aim to highlight the impact that Barclays’ funding for proposed fracking could have on people’s lives in Ryedale, North Yorkshire. The living room scene included a sofa, plant, coffee table, rug, tea pot and photo of the family’s home in Ryedale. 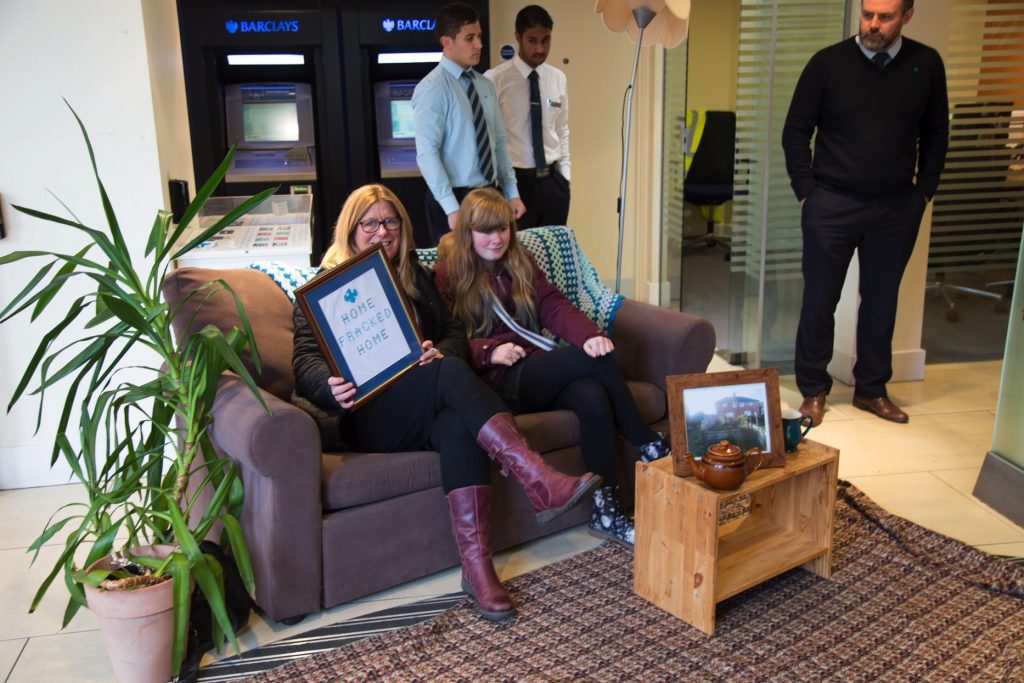 "Barclays bank, through their billions invested in fossil fuels, are wreaking climate chaos on communities across the world.

"We demand that they start acting as responsible corporate citizens by stopping funding fracking in North Yorkshire."

"I’m taking action this week along with my daughter, because if we stand back and do nothing there will be nothing left to save.

“We have lived in Ryedale for 10 years because we love living in an area that is so very beautiful and unspoilt. Ryedale has some of the most stunning countryside and wildlife in the country and we feel very blessed to live in such a special place.

“It must be protected so that it can be appreciated for generations to come as it should be with full access to clean water, air and land, and a safe climate. We are extremely worried about what fracking could do to Ryedale.”

“If I could send a message to Barclays it would be to urge you to not invest your money into an unnecessary project that could pollute our water and land. Instead you could use the money to fund sustainable energy such as wind farms, solar power and tidal energy.

“Fracking is not the solution. For my generation, please reconsider what you are wasting your money on and give us a sustainable and healthy future. Please Barclays, don’t frack my home.”

Following today’s (24 October) action, the mother and daughter have been invited by Frack Off London and Divest London to bring fracking home to Barclays and join them to protest at a central London branch on Saturday 29 October.