Asda has announced that it is working with Transport for London (TfL) to offer Grocery Click and Collect services locations at six London Underground station car parks.

The service, a World first, will offer same day ordering (before noon) and collection of Asda products from their home station after 4pm. The first stations will be East Finchley, Harrow and Wealdstone, High Barnet, Highgate, Stanmore and Epping.

The move comes just days after Asda set out its five year strategic priorities which included a major push into the London and South East market where it has lower awareness and fewer stores than its competitors.

Click and Collect expansion is central to increasing physical access to Asda from 53% today to 70% by 2018 with over 1,000 new sites planned including at Underground Station car parks.

It means that customers won't have to pay premium prices to subsidise city centre retail space.

After five years of recession and soaring house prices in the capital, Asda believes that demand for its service will grow quickly as word spreads.

"Customers in the South East tell us that they want the prices and quality provided by Asda value but they can't access it easily. This tie-up with TfL solves that," explains Asda Retail Director, Mark Ibbotson.

"We've led the way in Click and Collect by bringing Asda to where customers are rather than expecting them to come to us. From park and ride locations to business parks, now London Underground station car parks are another significant step on that journey.

"We believe customers will value the convenience of collecting shopping at their home tube station rather than carrying the products bought in premium convenience stores on their commute home." 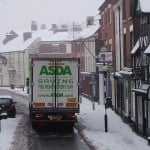 Asda delivering in the Snow by Gpmg

Same Day collection completely changes the notion of convenience for online customers and we are delighted to offer this service to Londoners. The technology has been developed together with Walmart labs in California, part of Asda's parent company.

It comes after similar, successful operations in Nottingham at a Park and Ride facility and at Green Park business park in Reading where commuters and local customers have welcomed the service.

Ordering will be available seven days a week with customers able to order from a laptop, tablet or smartphone via Asda.com or the Asda App to access fresh food and groceries, general merchandise and George clothing.