With the Autumn Statement next week (December 5), research from discount broker Willis Owen has revealed that savers are firmly against the cap on ISA savings rumoured to be under consideration by the Treasury.

According to Willis Owen, the findings are clear evidence that a cap would reduce the attractiveness of ISAs, dampen people’s desire to invest and save, and undermine wider efforts to encourage a greater savings culture and reduce reliance on easy credit.

Willis Owen polled its customers asking them whether or not they would support the introduction of a £100,000 lifetime cap on ISA holdings. With over 1,000 responses received, the result was definitive. Nearly nine in ten (89%) respondents said that ISAs should not be capped, with just 5% saying they should be capped and 6% undecided.

“We’ve heard businesses voice their alarm at the proposals for an ISA cap, but now consumers have delivered their overwhelming verdict. This should act as a wake-up call to the Chancellor ahead of his statement next week. During an unprecedented period of record low interest rates, which have severely penalised savers, ISAs have flourished and the Government has actively promoted their use. The real number of ISA millionaires is relatively small, and most savers share our view that introducing a cap would send out entirely the wrong signal at a time when people are being urged to save more.

“ISAs have been one of the few real success stories in getting people in the UK to save for the future – we should be building on this success, not scaling it back. We want the Chancellor to end the uncertainty around this and use his statement to confirm whether or not this is something the Treasury is looking at.” 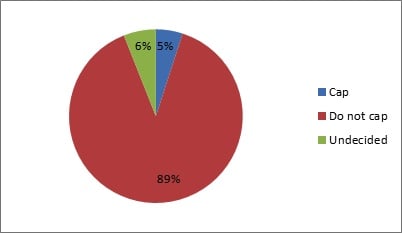