School examples 'must be followed by Government'

TWO SCHOOLS that have banned sugary drinks should be templates adopted by the Government, so says the British Dental Health Foundation.

The oral health charity believes as well as combatting the growing obesity epidemic, Government intervention would greatly benefit the oral health of children today and those in future generations.

Chief Executive of the British Dental Health Foundation, Dr Nigel Carter OBE, applauded the two schools for pressing ahead and banning these sugary drinks and encouraged the Government to roll the idea out across the county.

Dr Carter said: "It is very refreshing to see these schools taking their own initiative and banning sugary drinks. Drinks packed with sugar have long been problematic to oral health. The Foundation has supported a number of policies designed to curb sugary drinks consumption from a number of health initiatives, and still the Government has not acted.

"One in every four children starting school will do so with tooth decay. It may be a slight improvement compared to ten years ago, but it's still nowhere near where we'd like it to be. These figures support the need for the Government to work with health bodies and professionals across the country to safeguard the general and oral health of children. 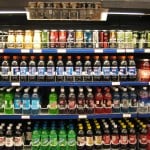 "The increase in consumption of sugary drinks is one of the key reasons for dental decay, particularly in children. Proposals such as the introduction of a duty on sugary drinks and brands reducing the amount of sugar in their soft drinks have both been mooted in the last 12 months. If we were to build on these foundations, there will be an inevitable reduction in consumption and benefits for both general and dental health.

"Cutting down on how often you have sugary foods and drinks is one of the British Dental Health Foundation's key messages. The key thing to remember is that it is how often sugar is consumed, rather than how much sugar, which heightens the risk of tooth decay. Better behaviour means better results, and there's a wealth of evidence to suggest sugary drinks are not the answer to obtaining them."

"School meals can be extremely hazardous to oral health, particularly if parents are happy to satisfy their child's sweet tooth and send them to school with fizzy drinks, sweets and chocolate bars. Children aren't born with a sweet tooth, it's picked up over time due to their early years diet.

"School meals have in the past been criticised for being unhealthy. By getting involved in the day, schools can promote healthy foods to pupils and encourage them to eat better. There is plenty of evidence linking this to attainment, so it really is in the school's best interest to install a healthy food and drinks policy."