Schroders: Lower inflation is only half the story- Keith Wade comments

Keith Wade, Chief Economist and Strategist at Schroders, comments on the global economy and why he believes that the fall in oil price will stimulate growth, via benefits to real incomes and consumer spending, although headwinds persist:

"Sentiment towards the world economy remained poor in the first month of 2015 with the IMF welcoming in the New Year by downgrading its forecast for global growth. It now expects global growth of 3.5% in 2015, compared to 3.8% in October. Whilst acknowledging that lower oil prices will help support activity, the benefits are expected to be offset by a deterioration in the Eurozone and emerging markets. An element of this reflects a correction to an overoptimistic view of China's growth prospects and the IMF forecast for this year is now in line with our own at 6.8%. There have also been cuts to growth forecasts for oil producers such as Russia, which is now expected to be in recession in 2015. Nonetheless, the overall IMF view is in line with that of the consensus, which shows that economists have downgraded their inflation projections, but made little change to their growth forecasts. Financial markets seem to agree, with long-dated bond yields falling to new lows and equities struggling to make progress.

Our own forecasts will be updated next month, but we are likely to take a more optimistic view, with a strong possibility of an upgrade to our growth projections. We continue to see the fall in oil prices as a boost to growth being driven by positive supply side developments rather than a response to a collapse in global demand. The main criticism of our view is that we are not fully taking account of the adverse impact on the energy industry itself, which is seen by some as a principal driver of the US recovery. It is certainly true that the shale boom has added to US growth, but this vastly overstates the importance of the sector in the overall economy. For example, the energy sector added 270k jobs since the economy turned in mid-2009, compared with a 9.15 million total. Even if all these jobs in energy were now lost, they would be offset by one month of payroll growth. The monthly totals for non-farm payrolls with and without energy are shown below in the chart. 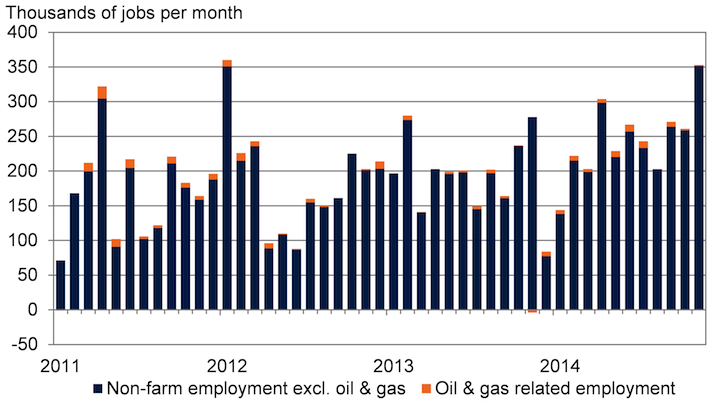 It is likely that the hit from cuts in capex will be more significant from an economy perspective than employment particularly in the short-term and may account for some of the recent weakness in durable goods orders. However, as argued last month, we would expect some offset as the non-energy sector benefits from lower energy costs and raises capex. Clearly there will also be a regional impact and the Dallas Fed reported that Texas is “…likely to grow but not nearly as strong as last year”, with the amount of drilling rigs beginning to fall. However, even the Dallas Fed is of the opinion that “…if energy prices remain low, (the) US economy should pick-up further in 2015”, indicating lower oil prices are a positive overall.

One reason investors are more concerned by the impact on the energy sector is that it has a greater weight in markets than the economy. For example, according to Bloomberg, energy accounts for 8.2% of the S&P500 and 14.1% of the FTSE-100 whilst the sector is only 3% and 2% of the US and UK economies. The relative underperformance of the energy sector in the US has been significant, but not out of line with the move in the oil price chart below. Similar concerns have dominated sentiment in the credit markets where, for example, energy is the largest sector in US high yield, constituting 13.4% of the index. 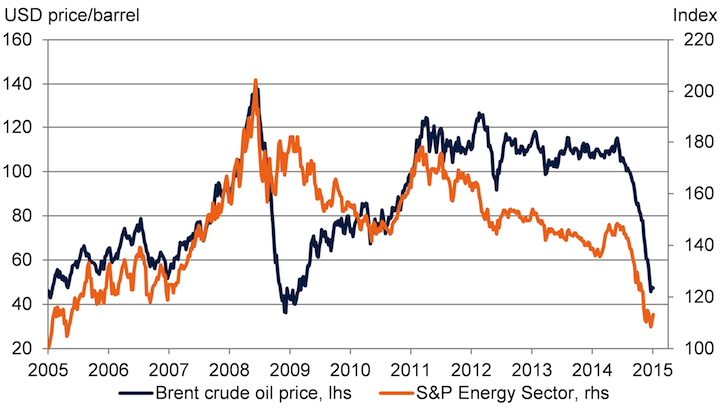 On balance, our conclusions are unchanged: there are offsets to the boost to growth brought by lower oil prices and these may be felt in the near term via lower capex and employment in the energy sector. Increased volatility in oil-related currencies and credit can have adverse effects on growth. Losses in the banking sector might also result, although our US analyst reckons these should be contained with the caveat that it is difficult to fully assess exposure via derivatives (taken on by banks as part of a hedge trade). Despite some commentary to the contrary, bank exposure to energy is not on the scale of sub-prime mortgage loans. Overall, we still believe the benefits to consumer spending and business through lower energy costs are set to outweigh these further out, with the result that global growth will be stronger and inflation lower. Economists have been quick to assess the effect of lower oil prices on inflation, but so far have failed to recognise the benefits to growth."

The Putin Paradox: How it affects investors

How to Build a Successful Investment Strategy for the New Year