Consumers of Scotch Whisky around the world are being given even greater reassurance that what they buy is the genuine article, thanks to a new verification regime.

The Spirit Drinks Verification Scheme has been launched by Rt Hon Danny Alexander MP, the Chief Secretary to the Treasury, at Benromach Scotch Whisky distillery in Speyside. The launch was attended by the Scotch Whisky Association and industry representatives.

The scheme ensures that every part of the Scotch Whisky supply chain, from distiller to consumer, within Scotland or beyond, is mapped by the industry, registered with the UK Government and inspected to ensure it complies fully with all the rules on the production of Scotch.

Scotch Whisky is already protected as a Geographical Indication (GI), meaning it can only be produced in Scotland according to UK rules. The European Union (EU) requires that the production process of every GI is verified by the authorities. The new scheme ensures that Scotch Whisky has the same high protection as other European GIs, such as Cognac.

All businesses involved in any stage of the production of Scotch Whisky must register with Her Majesty's Revenue & Customs (HMRC) by listing all their relevant sites within and outside Scotland, including distilleries, maturation facilities, blending and bottling plants. Bottlers of Scotch Whisky abroad will also be subject to controls.

The total annual cost of the verification scheme of around £350,000 is being shared across the Scotch Whisky industry, in accordance with EU rules. 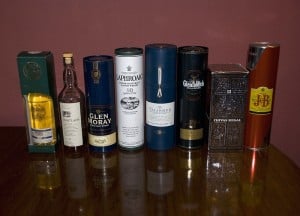 "Geographical Indication status is of great commercial value to the Scotch Whisky industry. This is a step change in the protection of Scotch Whisky and should be warmly welcomed.

"We fully support the introduction of the verification scheme by the UK Government. It will give even more protection to consumers of Scotch Whisky. It will greatly improve the industry's ability to stop the sale of adulterated Scotch Whiskies bottles abroad."

"I'm delighted that this scheme is now up and running, helping protect one of the UK's most important and successful export industries. The verification scheme will make sure people who buy Scotch get what they pay for – the finest spirit in the world. The Scotch Whisky industry is now worth around £4bn to the Scottish economy and employs more than 10,000 people in Scotland.

"The booming Scotch Whisky industry is a huge asset to Scotland and the UK which benefits from being part of the UK and European market. The UK Government is doing its bit today to step in and make sure cheap fakes don't undermine this unique global export."

Will Labour Hold On To By-Election Seat?