The iconic sight and sound of pipers playing Auld Lang Syne at Hogmannay Street Parties could be under threat – according to piping enthusiasts who are campaigning for more tuition in state schools.

More than 75,000 people are expected to descend upon Princes Street on December 31 to attend one of the world’s biggest and most famous celebrations, Edinburgh’s Hogmanay Street Party, which will see thousands of revellers sing along to the famous song at Midnight.

However, according to David Johnston, Championships Convenor for the Scottish Schools Pipe Band, the world famous tradition could become a thing of the past unless more is done to increase the number of opportunities for state school pupils to learn how to play the pipes and drums.

David says there is also a concern in piping circles that the skills will become regionalised and elitist with many of the country’s top bands coming from rural communities or private schools.

Many of Scotland’s state schools are still not offering their pupils the opportunity to learn piping and drumming in the classroom, with Edinburgh and Glasgow viewed as the real problem areas. 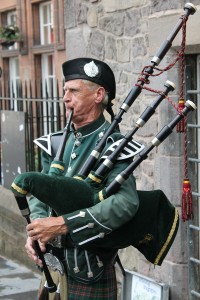 David said: "The future of our national instrument is under threat because if the inability of most of Scotland's councils to offer lessons in their schools.

“In several schools across Scotland, parent councils have had to resort to take their own action to set up after school clubs and bring in teachers at their own expense to offer tutoring to their children.

“I find it disappointing that in so many Scottish state schools piping and drumming is not on the curriculum – yet many private schools have flourishing bands and dedicated pipe tutors which bring huge prestige and self-esteem to band members and to the school.

“If this worrying trend continues we won’t have any future pipers and drummers and hearing the roar of pipes and drums on Hogmanay could become a thing of the past.”

Councils in areas such as the Highlands and Argyll and Bute are known to have a significantly larger portion of their students playing the pipes and drums whilst in school than in other areas.

However, in the largest Scottish cities, there are only a handful of pupils playing the pipes and drums and in some council areas, there are no students playing these instruments all.

The Scottish Schools Pipe Band Championships – the world’s biggest schools piping competition – is looking to change this by hosting a unique competition which looks to celebrate the pipes and drums and encourage their growth in schools throughout Scotland.

Craig Munro, a piper from the hugely successful Red Hot Chilli Pipers, believes that if more state schools in Edinburgh and Glasgow were to introduce the pipes and drums into their curriculum, other schools across Scotland will follow.

He said: “It is clear that several schools are trying to get school pipe bands up and running but it’s becoming increasingly difficult to get the piping and drumming onto the curriculum.

“If schools can offer students the likes of the recorder to learn music, then why not the bagpipes? It seems as though there is a lack of choice as to whether or not kids can learn the pipes and drums whilst in school.

“What many people perhaps don’t realise is that it is possible to build a fulfilling career from the bagpipes.”

He added: “What’s great about The Scottish Schools Pipe Band Championships is that they help to raise the profile of these instruments and encourage our younger generations to learn them.”

The 2015 Scottish Schools Pipe Band Championships are to be held at Broughton High School in Edinburgh on Sunday8 March. Schools still have until 26 January 2015 to submit an entry. For more details, please visit: www.thechampionships.org.