Scottish stock on the FTSE – how independence might shake the markets

IG offers CFDs and spread betting on over 6000 global shares. For more information on the shares covered in this piece, see: http://www.ig.com/uk/shares

As September 18 gets nearer and nearer, the vote for Scotland’s future is getting harder to predict. Both sides are claiming significant leads, but, until the morning after the night before the fate of Scotland will remain obscure, and there’s little that those of us outside the country can do to influence proceedings.

The major questions surrounding an independent Scotland’s economy – currency, debt, EU membership and oil – look unlikely to get answered any time soon.  Amongst the many Scottish companies listed on the FTSE, sentiment is mixed and uncertainty is rife. But has that uncertainty had an effect on their share prices? Looking at the performance of some major Scottish businesses during the journey to referendum can lead to a better idea of how the markets are viewing independence.

As one of the biggest listed companies in Scotland (not to mention the UK government’s majority ownership), Royal Bank of Scotland is one of the businesses set to be most affected by the independence referendum.  Overall, the stock performance of the banking group has been on a volatile road to recovery since the government increased its stake to 84% in 2009.

Initially, major announcements on independence led to a fillip in RBS’ share price, with small leaps as the SNP took power in May 2011, and confirmed the referendum in October 2012. As answers to key questions have failed to materialise, however, that trend has reversed. Both the setting of the question in January last year and of the actual date two months later resulted  in major drops in stock, down to a two-year low at the start of April 2013.

As the referendum edges into sight, RBS’ share price performance appears to be weakening. It’s down around 50 points from the post-buyout in October last year, and is rated only as a ‘hold’ by the majority of brokers.

Standard Life – whose chief executive has announced an intention to move major parts of its business south if Scottish independence becomes a reality – has seen less volatility leading up to the referendum. Its share price returned to pre-2008 levels last year, and has largely remained at that level since. It appears that the precarious position of RBS is off-putting to traders, who show little belief in an independent government’s ability to secure the banking giant’s future.

Scotland has long been a country with strong technological innovation, and several Scottish companies listed on the London Stock Exchange originate from the silicon glen. Cupid PLC, the operator of several online dating sites, appears to have been fairly exposed to the uncertainty caused by the referendum.  Even before a BBC investigation caused a huge drop in the company’s share price, it experienced an initial plummet as referendum news came to the fore: shedding 31% in the two weeks after the question was set. 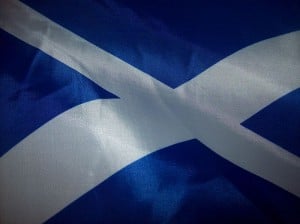 Glasgow-based cloud computing experts Iomart have also suffered in the run up to the referendum , with a stock price that has been in decline for most of the year despite strong financials and suggestions that they may consider a move south should the Scottish vote yes. With the tech sector always vulnerable to change and question marks hanging over most companies housed in Scotland but with a majority user base elsewhere, perhaps such constrained performance is unsurprising.

One man who hasn’t been afraid of speaking out against independence is ex Aggreko CEO Rupert Soames. The power and temperature control firm has struggled of late, illustrated by a series of profit warnings that have unsettled shareholders, and independence has seemingly added to their woes. A recovery in its share price was immediately reversed after the referendum date was announced– possibly due to Soames’ insistence that independence would mean ‘years of uncertainty’ – underlining the influence of the subject.

An interesting counterpoint comes from Barr, the manufacturer of Irn-Bru (amongst other beverages). The national brand has over 40% of its sales in Scotland, and has seen a steady rise since the referendum was confirmed back in October 2012. All their public statements on independence have displayed pragmatism, and the markets appear comfortable with the position of Barr after the vote in September.

Relative share price movement of Barr and Aggreko since the referendum was announced October 15 2012.

Overall, it appears that the markets have short-term memories when it comes to Scottish businesses, as any movements surrounding independence news and speculation can be quickly overridden by company announcements, earnings news or sentiment shifts. Though it does look like the situation in Scotland is causing volatility, it varies hugely from company to company.

The economic question at the heart of the debate – whether an independent Scotland would be better off – remains unanswered, and will continue to do so for some time. Any investors willing to predict an outcome for Scotland will find many ways to put their money where their mouth is.

Spread bets and CFDs are leveraged products. Spread betting and CFD trading may not be suitable for everyone and can result in losses that exceed your deposits, so please ensure that you fully understand the risks involved.

This information has been prepared by IG, a trading name of IG Markets Limited. The material on this page does not contain a record of our trading prices, or an offer of, or solicitation for, a transaction in any financial instrument. IG accepts no responsibility for any use that may be made of these comments and for any consequences that result. No representation or warranty is given as to the accuracy or completeness of this information. Consequently any person acting on it does so entirely at their own risk. Any research provided does not have regard to the specific investment objectives, financial situation and needs of any specific person who may receive it. It has not been prepared in accordance with legal requirements designed to promote the independence of investment research and as such is considered to be a marketing communication. Although we are not specifically constrained from dealing ahead of our recommendations we do not seek to take advantage of them before they are provided to our clients.